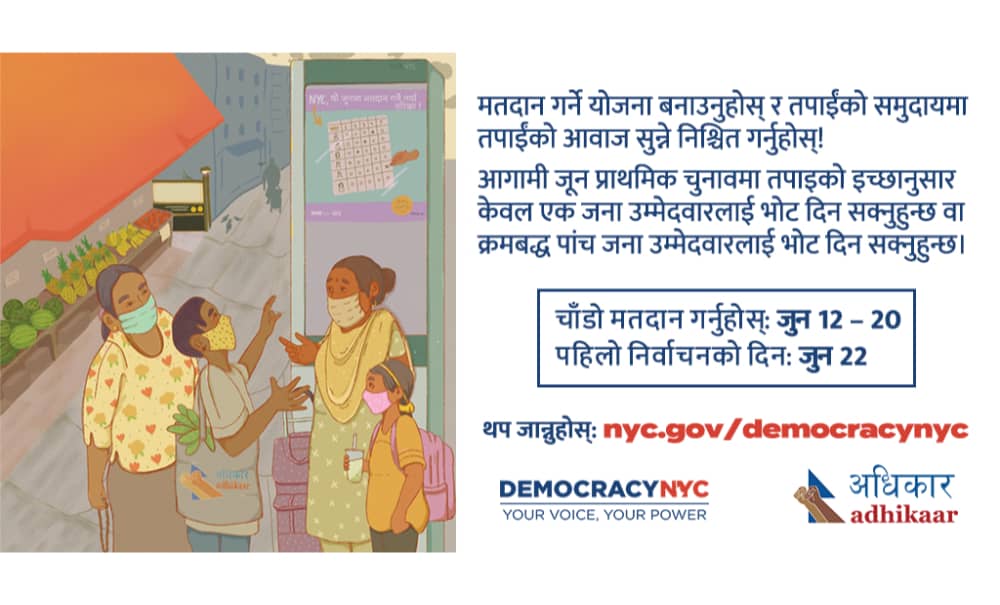 In this strange time of reunions and reopenings, alongside COVID cases surging unevenly across the US, we invite you to join us in a deep dive into the local. Yesterday, in lower Manhattan’s Foley Square, a coalition of groups raised their collective voices to tell Congress to recognize the essential labor of undocumented immigrants during the pandemic by offering a pathway to citizenship. The July 23 Immigrants Are Essential rally boldly took over the Manhattan Bridge, calling for #FreedomTogether and #WeAreHome. Local efforts can have national impacts.

Our newsletter this week highlights the Woodside-based group Adhikaar: the local struggles of nail salon workers and domestic care workers, as well as Adhikaar’s national push to extend Temporary Protective Status (TPS) for Nepal. We also review the results of the recent New York City Council June primaries and celebrate the increased representation of immigrants, people of color, women, and working-class voices in NYC politics.

“My campaign included folks in the voting process who were never spoken to before – and we did it in multiple languages, with a platform and policies that center the experiences of immigrants and working-class people…” — Felicia Singh, primary winner in District 32

June 22 was “just” a primary, but in our heavily Democratic city the winners of Democratic primaries often determine the winners in November. The 2021 primary was the first to use ranked-choice voting. This voting method promises to produce more winners who are women and people of color. And it certainly did in our city.

The 2021 Democratic primary marks a significant break from the past, and the 2022 City Council will be a better reflection of the city’s population. There will be more women than men, more people of color, more foreign-born New Yorkers, an openly gay Black woman (Crystal Hudson), the first Muslim woman on the Council (Shahana Hanif), two Korean American women (Julia Won and Linda Lee), and more progressive members overall. “The next City Council will give voice to the Black, brown, immigrant and low-income New Yorkers who make our city run,” said Sochie Nnaemeka of the Working Families Party.

Although 942,000 New Yorkers voted in the Democratic primary, areas that were heavily impacted by Covid-19 (like Corona and some Bronx areas) had lower turnouts than in prior races.

Queens has 15 Council seats and 12 will probably be filled by a woman and/or a person of color, including 9 women of color. Two of the Queens seats will go to LBGTQ women: Tiffany Cabán in District 22 and Lynn Schulman in District 29. In the three districts in our immediate  neighborhood, the results are:

Among the progressives, we can count the 13 candidates supported by Make the Road New York who won their District primaries:

“This is a long time coming and we have, for years and years —decades, even—desperately needed representation that is actually reflective of the people in our borough…”  —Tiffany Cabán, District 22 Democratic primary winner

On an early summer night in June, Adhikaar literally lit up Union Square with a collaborative art piece/projection, educating citizen-immigrants about ranked-choice voting. In July, Adhikaar participated in a roundtable discussion on immigrant rights at the White House with Vice President Kamala Harris. As a women-led community and worker organization based in Woodside, Queens, Adhikaar in 2021 is pursuing a robust agenda for mobilizing political power and securing social and economic justice for the Nepali-speaking community.

In February, with an eye on the upcoming NYC primaries, Adhikaar and coalition partners introduced the NYC Care Campaign, urging all mayoral and City Council candidates to adopt it as a platform. The Campaign aims to transform the city’s care economy into an equitable and sustainable labor sector, including health insurance and benefits for over 200,000 care and domestic workers—predominantly immigrant women of color. On International Domestic Workers Day, Adhikaar members rallied in front of City Hall demanding that Speaker Corey Johnson bring the Human Rights Law for Domestic Workers (Int339) to a vote in the City Council, where it has majority support. The Law would, for the first time, legally protect domestic workers from human rights violations in their workplace.

Nail salon workers may not be seen by everyone as care workers but, as Adhikaar points out in their recent newsletter, “many of our nail salon members, part of the immigrant women workforce who offer this pampering and care to others, are not able to care for themselves due to exploitative working conditions. With the pandemic ongoing, the routine health and safety violations that already exposed workers to carcinogenic chemicals, have become even more harrowing.” Adhikaar is a leader of the NY Healthy Nail Salon Coalition, fighting for passage of the Nail Salon Accountability Act in the state legislature. With 29% of NYC nail salon workers reporting COVID-19 infections, and with wage theft and over 50% of workers experiencing health problems after starting work in a nail salon, Adhikaar is committed to making visible the struggles of this largely invisible immigrant women workforce.

Finally, this week Adhikaar launched a public campaign calling for the redesignation of Temporary Protective Status (TPS) for Nepalis living in the US. TPS is granted to immigrants who—often for reasons of natural disaster or political violence—are unable to return safely to their country of origin. And TPS is now a precarious legal status for tens of thousands of Nepali immigrants, many of whom live in central Queens. Adhikaar’s petition to the director of Homeland Security highlights the dangerous conditions in Nepal for returning migrants: infrastructural damage from the massive 2015 earthquake and catastrophic flooding in 2017; and human rights abuses targeting women, Dalit minorities, children, and other vulnerable populations.

A recent survey conducted by Adhikaar and partner groups reveals that 81.5% of current Nepali TPS holders fear for their own or their family’s physical safety if they are forced to return to Nepal.