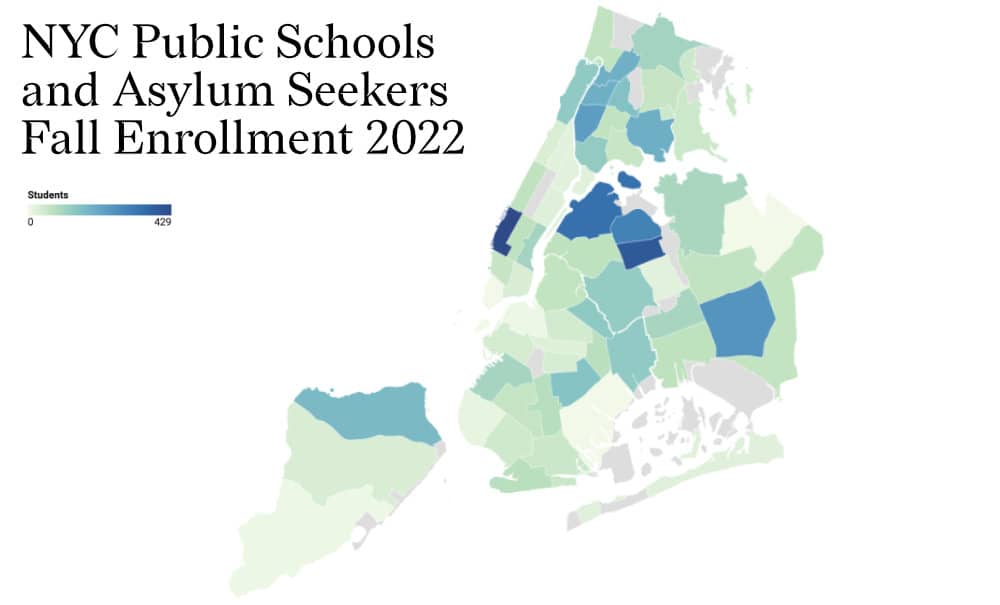 An unprecedented drama is unfolding here in NYC, as thousands of recent migrants land in the city after being bused north by Republican governors in Texas and Arizona. Media coverage of the everyday lives of the newcomers—many of them families with school-age children—has focused on the cascade of challenges they face and the scramble of efforts to support them. Some of you, our readers, along with other Queens neighbors and organizations, have mobilized to address the unfolding political and humanitarian situation.

This week’s newsletter offers a report on how the city is handling the unexpected influx of an estimated 5–7000 newly-enrolled students in NYC public schools, the majority of them recent immigrant arrivals.

This is a humanitarian crisis …. we just want the children to feel safe.

In 1982, the Supreme Court ruled in Plyler v. Doe that migrant children can attend K-12 public schools in the US regardless of their legal status. In May 2022, Texas Governor Abbot suggested he might challenge that ruling, citing the high cost for educating migrant children. He then started busing recent migrants and asylum seekers to NYC, including thousands of school-age children. During the summer the NYC Department of Education (DOE) budgeted for just over a thousand new students, but that number has now grown to an estimated 7,200 children who were placed with their parents in shelters or repurposed hotels throughout the city. One-third of those were enrolled in Queens schools. Immigration status is not tracked by the city’s DOE but student enrollment from homeless shelters is; officials believe the majority of them are newcomer immigrants, many of them bused to NYC by Texas officials.

The city created Project Open Arms to support new migrant families with children entering the school system by bringing together services from various city agencies. One highlighted concern about late-enrolling students is that although they may have higher needs, they are often sent to lower-performing schools. The Project tried to place the newcomer students in a limited number of districts and schools, preferably in close proximity to shelters where families were living. Vanessa Luna, a co-founder of ImmSchools, a national, immigrant-led non-profit that helps schools support immigrant families, also stressed the need for school staff to be trained on the legal rights of immigrants, especially those who are undocumented.

By August, the city was still making adjustments to support the schooling of migrant children unexpectedly bused to New York by Republican governors. Rita Rodriguez-Engberg, the director of the Immigrant Students Rights project with Advocates for Children New York (AFC), highlighted two issues: first, there are not enough bilingual programs in the city for all the eligible students; and second, many schools fail to inform families of their right to elect bilingual education for their children.

To help support the existing few hundred Spanish-language bilingual teachers in NYC public schools, the Department of Education launched a new partnership with the Consul General of the Dominican Republic. It will bring 25 bilingual teachers from the DR on cultural exchange visas this year to support staff and students, and 25 more next year. These new staff would boost the Dream Squads and Immigrant Ambassador Program already in place to support English Language Learners (ELLs).

In addition to instruction, it was apparent that school staff were working to provide basic needs like clothing and food for the new students. The city responded by forming “borough response teams,” asking parents to join them and help organize clothing and food drives, as well as supporting resource fairs. The response from volunteer organizations and individuals has been inspiring and well-documented. These grassroots actions highlight the capacity for compassion and social solidarity, in contrast to the dehumanizing US immigration proceedings created by our stagnant national policy-making. Principal Russo of PS 145 noted on 60 Minutes that she was doing laundry for some of the new students as well as getting them school uniforms and—as a pro bono lawyer—looking to provide some with legal representation.

Queens is the borough enrolling the most newcomer students, and many are in District 30, which includes Jackson Heights, Woodside, and Corona. Whitney Toussaint, president of District 30’s community education council, estimates about 500 children are newly enrolled there. That is almost a quarter of all newcomer students estimated to be enrolled throughout 107 Queens schools. An interactive map using DOE data shows the student distribution around the city. 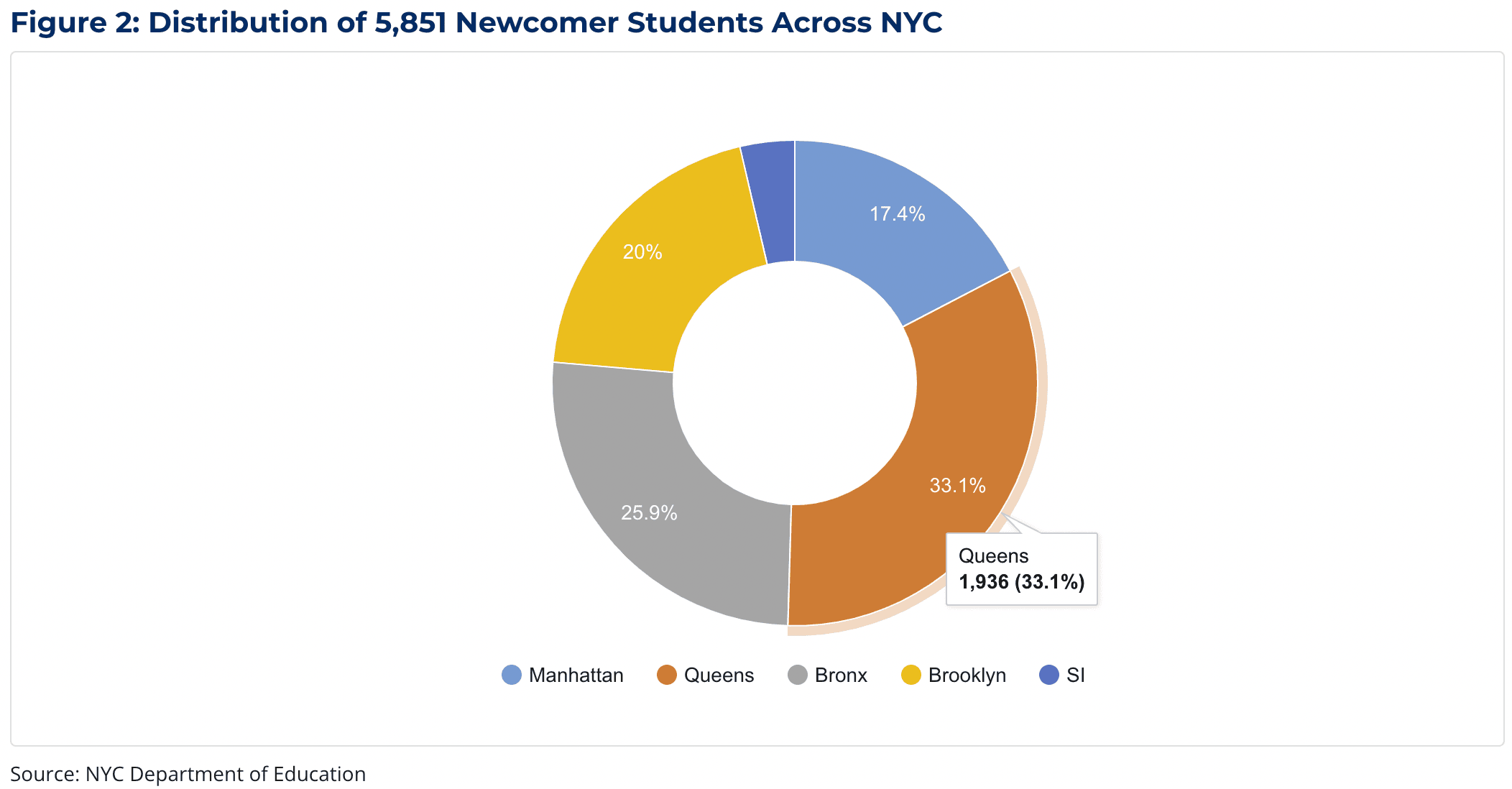 Students from Families Seeking Asylum: Update on the City’s Response

At the end of August the city began distributing $12 million to schools that had welcomed new students who are homeless. But it came with restrictions like it “cannot be used to hire full-time staff” such as sorely needed bilingual educators. According to NY State Senator Jessica Ramos, one school received a grant to open a food pantry and turned an old cafeteria space into a store with free clothing and supplies. The school that got the most money from the program was PS 143 Louis Armstrong in Queens which already had a dual-language program. The $194,000 it received suggests the school had enrolled nearly 100 students from temporary housing since the summer. About 50 other schools that enrolled six new arrivals were to receive just $12,000 while those with five students or less didn’t receive any extra funding.

In September, NYC Comptroller Brad Lander began to acknowledge that DOE cuts over the summer from the Fair Student Funding (FSF) school budget allocations were looking problematic. Of the $7 billion to spend through 2024-25, only $79 million would go to social workers, guidance counselors, and school psychologists. Schools that had enrolled many new students had lost a half-billion dollars in FSF cuts. Given the new enrollments, Lander recommended these schools should receive, at minimum, an additional $34 million in funding to “staff up to serve their new students”. In November, the DOE announced it would not carry out the original budget plan cuts and also would use $200 million in federal stimulus money to maintain school budgets.

Staten Island is the NYC borough that received the smallest distribution of newcomer students this year. The borough’s Republican President Vito J. Fossella asked the Independent Budget Office to do an analysis of all spending costs associated with assisting asylum-seeking families, including and beyond education. The IBO estimated around $580 million would be required annually for just under 6,000 Asylum Seekers/Households.

Fossella then held a media event on November 15, with Ellis Island in the background, to complain that taxpayer money would be better spent on projects that would benefit all those who live in the city. He concluded with a tired trope about Ellis Island being a reminder of a time of “good immigration”, where people came to this country legally, “the right way”. Does he know the island’s true history? Only two percent of immigrants at Ellis Island were denied entry to the United States. During its peak processing time in 1907, over a million immigrants passed through the port in just a few hours; no passports or visas were required. If Fossella recognizes that as legal and good immigration, then by all means let him advocate for this same approach with current asylum seekers, and grant the parents of these new school children the ability to work immediately.