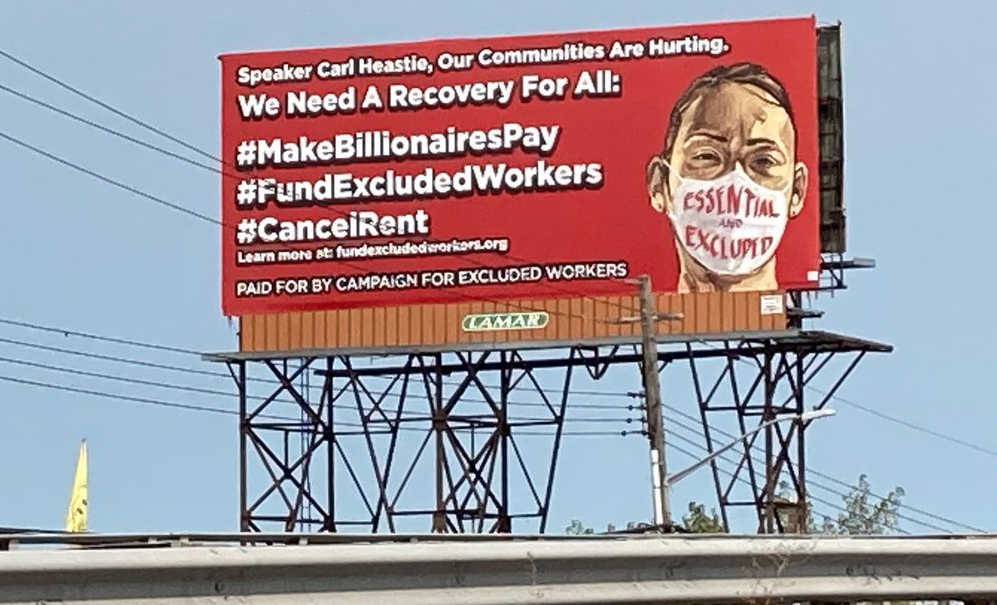 Gratitude to all of our readers who have filled out our newsletter readership survey. If you have not yet responded, please fill out the brief survey today! It asks for your thoughts on our articles and gives you an opportunity to describe yourselves to us. We also continue our ‘Neighborhood Emergency!’ fundraising campaign, gathering direct donations to six local immigrant-led groups providing mutual aid, support, and solidarity during the pandemic.

Please check out our fundraising webpage that links you directly to the donation page of each of the six organizations, and describes each group and the extraordinary work they are doing. To all of you who have already made donations, enormous thanks. Whatever you are able to afford can make a real, immediate difference to immigrant communities in Jackson Heights and beyond.

Immigrant rights groups in New York tend to be rooted in specific immigrant nationalities, which creates a diverse and complex web of activism in the city. Although they often work in coalition with others, these groups naturally concentrate on issues that impact their particular communities.

But the pandemic has created an urgent common challenge: a struggle for basic survival that’s shared by all working-class immigrant communities. Some of the most immediate on-the-ground needs of individuals and families are being addressed by local groups through direct assistance and mutual aid. Meanwhile, on the level of city and state politics, the response by immigration activists to this common challenge seems to have converged around two key demands: a) rent cancelation, and b) a state fund to support immigrant workers who have been excluded from government coronavirus aid, financed by a tax on billionaires.

As newsletter readers are aware, the pandemic-induced housing emergency couldn’t be more dire. Rent was unaffordable before Covid-19. Things are much worse now. A recent study finds that 66% of renters in the US are concerned about being evicted and that over 20 million people are likely to have an eviction filing against them by January. An estimated 1.4 million renters in New York City are behind on their rent. Governor Cuomo keeps extending conditional, month by month moratoriums on evictions–the latest partial moratorium ends January 1. But back rent is piling up, creating impossible debt for working-class New Yorkers, most of whom are immigrants. Landlords are already filing for pre-pandemic and other types of evictions in Housing Court. Many are just waiting for the day the state moratorium ends to pounce on renters who fell behind during the pandemic.

Progressive lawmakers have tried to address the housing disaster. Federal legislation to cancel rent was proposed by Rep. Ilhan Omar. It was never taken up by the rest of Congress. In New York State, a proposed Rent and Mortgage Cancellation Act, introduced in July by Assemblymember Yuh-Line Niou and Senator Julia Salazar, has gone nowhere. Another bill by NY Representative Michael Gianaris, sponsored by 21 state representatives, languished in the Judiciary Committee.

But the real pressure behind the demand for rent cancelation is coming from the grassroots. Notably, local immigrant justice groups have picked up and amplified the demand, including DRUM, Adhikaar, Make the Road New York,and Damayan. Chhaya, which is part of the United for Small Business NYC Coalition, advocates rent cancelation for small businesses. These organizations feature Cancel Rent in their demonstrations, social media, and publications.

The Cancel Rent movement has generated street heat. On October 1, tenants and Cancel Rent activists dragged furniture onto Broadway, blocking the avenue near Park Place. And on October 16, the entrance to Brooklyn Housing Court was spray-foamed and barricaded with a bike lock. A communique, demanding “an immediate end to evictions and retroactive rent relief,” explained why:

New York City’s unhoused population has reached its highest level since the Great Depression…. However, eviction courts have been allowed to continue with proceedings….This is unconscionable and we demand that evictions end immediately. If our elected leaders won’t do it, then the People of New York will make sure it happens.

Back in April and May, there was a series of rent strikes in 57 New York buildings, demanding rent cancelation. Some of the strikes were in our neighborhood. Tenant activists are working hard to spread the word about rent strikes as a key tactic for keeping people in their homes. They argue that collective action by tenants is the only way to “force the establishment to capitulate.” NYCHA Rising is currently building a rent strike in public housing projects, focused mainly on the pain and suffering caused by unsafe and unhealthy conditions, made even worse by the pandemic. If the NY State eviction moratorium ends without rent cancelation, there will almost certainly be an increase in this kind of direct action by tenants.

In Albany, Senator Jessica Ramos sponsored legislation for a tax on billionaires who have seen their wealth skyrocket during the pandemic. This tax money would be used to fund aid for essential workers and immigrants not included in federal relief programs. AOC and a whole list of other progressive politicians support this idea.

Governor Cuomo initially refused to consider a tax on billionaires, many of whom are his campaign contributors. But pressure is building, and he’s been forced to moderate his position, opening the door to the possibility of a tax on the wealthy. There have been loud demonstrations outside the governor’s residence–in one case, 150 New Yorkers formed a “bread line” in front of his mansion. Many other actions have been organized outside the offices of billionaires, and in other symbolic locations. A Fund Excluded Workers petition currently has 8,770 signatures, with a goal of 12,800.

At a time of emergency, with so many issues clamoring for attention, it’s noteworthy that these two campaigns–Cancel Rent and Fund Excluded Workers–have emerged as dual political focal points for several front line immigrant rights organizations in our neighborhood. As we evaluate where to put our support and energy in the middle of a difficult and complex political situation, following their lead may be just the right move.