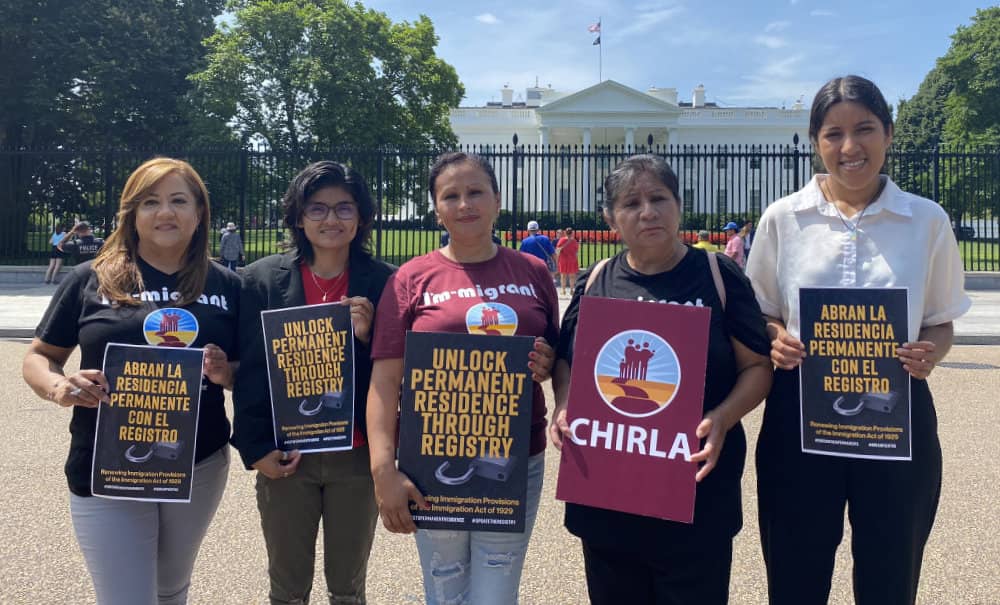 Greetings as deep summer hits and heats us all. It’s been a pleasure for us to leaflet—when it’s not too hot!—at the JH Farmer’s Market and get to meet and talk to some of our newsletter readers. The newsletter is now regularly translated into Spanish and available on our JHISN website – Aquí va un saludo caluroso y comprometido a nuestros lectores en español!

This week’s newsletter takes a look at the threat to immigrant electoral power from the proposed re-mapping of City Council districts. We then report on the latest legislative move to create a legal pathway to permanent residence for millions of undocumented folks in the US.

Proposed revisions in City Council district lines triggered by the 2020 Census are igniting a storm of controversy among immigrant justice activists. The redrawn maps submitted by the NYC Districting Commission on July 15 were greeted with accusations that they fractured and weakened the voting power of immigrant communities in violation of the City Charter.

Revising district lines is a complex task, requiring the Commission to meet manifold legal mandates at the federal, state, and local levels. The US Constitution requires all legislative districts to have a roughly equal population. Since the city now has a population of 8.8 million, each of the 51 City Council districts must have approximately 172,882 people; only a 5% deviation is permitted. In addition, the City Charter requires the Commission to keep neighborhoods, districts and communities intact, limit crossover districts between boroughs, avoid splitting voters of the same political party in order to diminish their effective representation and also avoid oddly shaped districts.

Immigrant justice organizations reacted swiftly to the Commission’s proposed map. DRUM (Desis Rising Up and Moving), a Jackson Heights-based group representing South Asian and Indo-Caribbean communities, claims that the new maps will disempower their communities by splitting them into multiple districts in both Queens and Brooklyn: “The fact that this commission did not even try and unite a single one of our communities in Brooklyn and Queens, and worse further divided some, is against their own mission and mandate by the Charter of New York City.”

DRUM’s July 19 Facebook post overlays the Commission’s maps with the actual borders of immigrant communities. In Richmond Hill and Ozone Park, we can see that Guyanese, Trinidadian, Punjabi, and Bangladeshi communities are split into four different districts; the Bangladeshi community in Kensington into four districts; the Pakistani community in Midwood into three districts, and the Tibetan and Nepali communities in Woodside are moved into a majority white district which includes Maspeth. Other working-class communities of color have also been divided into multiple districts. DRUM vows to fight these changes.

Another controversy involves the creation of an Asian-majority district in Brooklyn. There has been a 13% increase in the AAPI (Asian American Pacific Islander) population, which now numbers 1 million people or 14.3% of NYC’s population. Everyone agrees that the new district map must reflect this growth. But there is a dispute over the proposed new district because it breaks up a pivotal existing Latino district. Alexa Avilés of the current 38th District and Justin Brannan of District 43 spoke out against the preliminary map in a joint statement

“For 30 years, a City Council seat has existed to empower Latinos to elect a candidate of their choice, in a district that included the totality of Sunset Park and Red Hook. [It’s] pitting one community of interest against another and wiping out hard-fought gains that have existed for a generation.”

“By splitting several immigrant communities and not maintaining all of the City Council’s plurality minority districts, the NYC [Districting] Commission did not meet its mandate of keeping communities of interest together. The proposed district lines split up communities of color in Woodside, Ridgewood, Kensington, Richmond Hill, and the historically connected Latino communities in Red Hook and Sunset Park, making it harder for immigrant New Yorkers in these areas to elect the leaders that will represent their interests in the City Council.”

The Unity Map Coalition, composed of the Asian American Legal Defense Fund, the Center For Law and Social Justice at Medgar Evers College, and LatinoJustice PRLDEF, raised concerns about the map because three new contained districts within Staten Island would cause unnecessary shifts in districts in other boroughs. The change would “disrupt existing performing districts, and unnecessarily ‘crack’ long-standing communities of interest, for example, splitting Sunset Park between Districts 38 and 43 in their preliminary map.” On July 18 they presented their own map to address these issues.

The City Council cannot veto or change the maps once the NYC Districting Commission approves the final version. But local activism can and often does impact how district lines are drawn. There will be public hearings during August leading to a second draft of the maps, due September 23. New maps must be finalized by February 7, 2023.

“It is crucial that we engage the public in this process. The shape of our districts plays a part in who we choose to represent us, which in turn affects how government addresses every issue we face.”–Councilmember Selvena Brooks-Powers (D-Laurelton)

2. #UpdateTheRegistry as Path to Permanent Residency

Like so much of immigration politics, the significance of new legislation just introduced in Congress can’t be understood outside of history. The very title of the “Renewing Immigration Provisions of the Immigration Act of 1929”—introduced last month by 46 House Democrats—invokes the shadow of history. Almost one hundred years ago, the “Registry Law” of 1929 was established, permitting immigrants who entered and have lived in the US before a specific cutoff date to apply for permanent legal residency. The cutoff registry date has been updated four times since passage of the Act.

Current registry law, updated over 35 years ago by the Reagan Administration, sets the cutoff date at January 1, 1972. This means that only immigrants who have lived here for half a century are eligible to apply. As a result, from 2015-2018, only 305 immigrants applied for permanent residency under the registry law.

The proposed legislation would expand eligibility for permanent residency to almost 8 million undocumented immigrants. It would change the Registry Law to allow any immigrant who has resided in the US for seven years or more, and who meets specific criteria, to apply for green card status. The updated law would create a rolling registry date to replace the outdated 1972 cutoff. Key sponsor of the bill, Congresswoman Zoe Lofgren, notes that changing the date for legal residency is not new. “What’s new,” Lofgren says, “is the Congress’ failure to regularly renew the date as has happened so many times historically.”

Grassroots immigrant justice groups across the nation are mobilizing to support the House bill with campaigns like #UpdateTheRegistry and #UnlockResidency. Queens-based groups endorsing the updated registry law include Adhikaar and Make the Road NY. Supporters argue that renewing the 1929 Immigration Act can create systematic immigration reform without requiring new laws or controversial ‘amnesty’ provisions, and can offer dignity to millions of people who currently cannot live legally with their spouse, or their US children, who cannot work legally or apply for financial aid for education.

Vanessa, a 20-year-old undocumented resident who has lived in the US since she was two years old, urges legislators to approach immigration:

“not only as a continual crisis but as a normal, orderly, civil process. Updating this registry begins to do that by letting people like me, who have lived in and contributed to this country for many years, get a green card. It is possible. If we get enough people behind this bill, we might just be able to win once and for all.” (July 20, 2022)