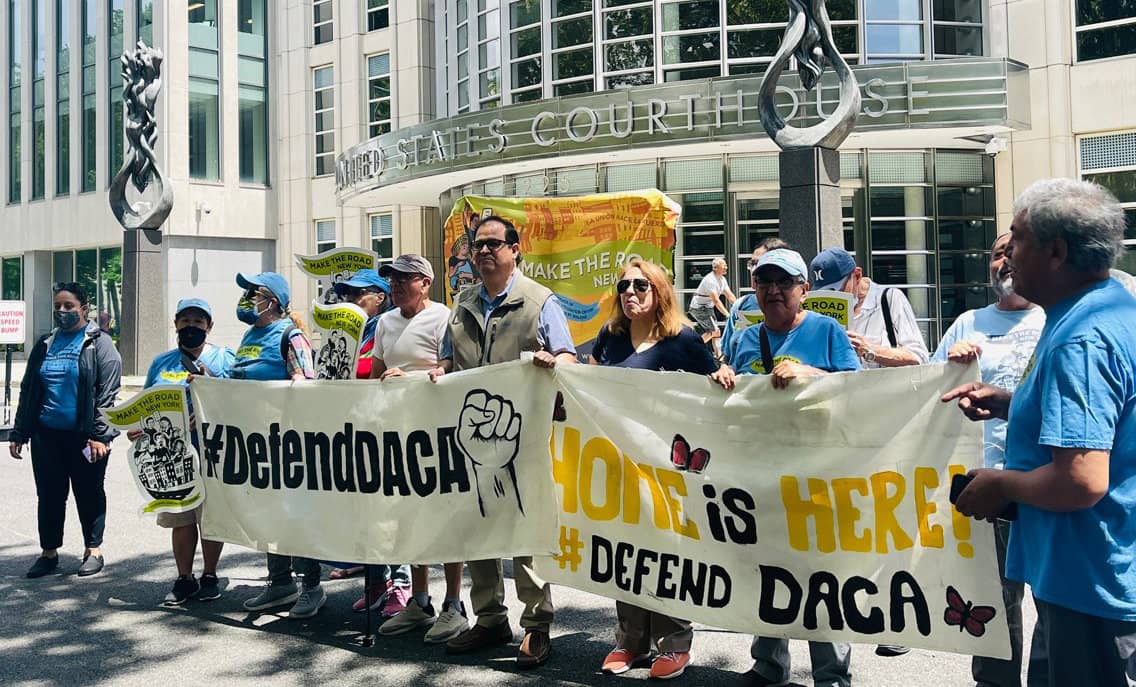 As we enter the thick of summer, we wish you all extra ease and an expanded sense of what’s possible. Our newsletter takes a look at the complicated situation of Dreamers and the tenth anniversary of DACA. And we offer a cautiously hopeful report on changing city policies around street vending in NYC. As we collectively re-dream what immigrant justice might feel like, we are grateful for your support of JHISN. Please put our newsletter to good use!

In 2022, it is time to appreciate the good outcomes from ten years of DACA, the Deferred Action for Childhood Arrivals, while recognizing the limitations that urgently need to be overcome. Congress failed to pass the DREAM ACT in 2010, refusing to legislate a path to citizenship for even a narrowly defined group of youth who came or were brought to the United States as children. As DACA recipient from Yonkers, Brian Aguilar Avila, commented, “They always say they have a plan, that congress has a plan, and that Trump had a plan, but it always dies.”

Joana Toro created a photographic journey of DACA activism in Queens from 2012 to 2022, highlighting both Make the Road New York – which initiated a class action lawsuit to protect DACA-eligible immigrant youth – and the MinKwon Center in Flushing. One of MinKwon’s current Immigrant Justice Organizers, Woojung “Diana” Park, a DACA recipient, stated that being undocumented can make you more a bystander than an activist.  Even so, after the DREAM ACT failed to pass, it was undocumented youth that took action to influence Obama (who was deporting in greater numbers than any president before him) into signing the executive order creating DACA on June 15, 2012. Janet Napolitano, the former Homeland Security Secretary, said she did not expect the policy would still be in place 10 years later.

Many DACA stories reveal that the eligibility to work without fear of deportation presented the opportunity to obtain a higher education. Although DACA youth were not eligible for state-provided financial aid and had to pay out-of-state tuition costs charged to international students, they could now work to obtain a degree. NY State, seven years after DACA began, passed the Jose Peralta Dream Act, giving undocumented students the ability to qualify for NY state aid for higher education.

Diana Pliego was living in South Carolina, where undocumented people were prohibited from attending public institutions to study. She had to apply to private institutions and, although she received a full-tuition scholarship to Columbia University, could not afford the additional housing expenses. But she and her DACA recipient siblings could now all work, and so could cover those costs. Pliego now works at the National Immigration Law Center (NILC) and was conflicted by the 10-year anniversary because, while DACA has changed lives for the better, the renewal process is problematic: “The past 10 years I’ve kind of had to live my life in two year increments, not knowing if one day someone is going to take this away from me and I won’t have any control over that decision.”

DACA renewal, required every two years, is perhaps manageable for a college-age student, who can tackle life in short increments. But there are now more DACA recipients over the age of 36 than there are under the age of 20, and over 300,000 US children now have one parent who is a DACA recipient. Bruna Sollod notes, “Now that I’m a mom, now that I have a career that I really love, thinking in two year increments doesn’t work anymore.”

Family insecurity is an outcome of bipartisan political dysfunction and anti-immigrant sentiment in mainstream U.S. political discourse. The Trump administration failed, thanks to a court order, to end the DACA program – not because there were issues with the proposed termination but because the change was implemented by an improperly appointed acting secretary of Homeland Security. Ending DACA now would create another US government attack on immigrant families, just like separating families at the border, and would directly impact US citizen children.

This week a Federal court in Louisiana heard testimony from New Jersey’s state solicitor urging 3 Republican-appointed judges to rule against a lawsuit brought by 9 Republican-led states claiming DACA was improperly created by the Obama administration. If the lawsuit is successful it would shut down the entire program based on administrative procedural rules not on the program’s value or purpose. Terminating DACA would ignore these economic benefits: 94 percent of the DACA-eligible population in the labor force are employed; 45,000 own their own business, and in 2015 working DACA recipients boosted local economies by over $655 million. It would set up the deportation of 542,000 DACA-eligible essential workers, 62,000 of whom work in health care, and almost half of which were employed on the frontlines of the COVID-19 pandemic

As NILC stated, “DACA has served as a lifeline, but DACA recipients need lasting stability. Voters across the political spectrum overwhelmingly favor a permanent solution, and lawmakers have a mandate to deliver.” Surveys of the US public show consistently that three-quarters of the population are in favor of granting a path to citizenship for young people brought to the US illegally as children. Esder Chong, who received DACA at 15, and had experience at NILC as she worked towards her two Masters degrees, said, “If and when DACA is rescinded, we need a plan for the undocumented community at large. Congress has no plan. Immigrant rights organizations are not in agreement on what the plan should be.” Chong suggests giving up the idealistic “citizenship for all” solution and pushing instead for “a pathway to residency — a legal status for all” in order for people to stay in the country, to pursue education and a good life, and be able to work and contribute to local and national economies.

2. Justice for Street Vendors in NYC

“Just let us work with dignity. We are immigrants, we’re not hurting anybody … We’re out working and trying to provide. All I want is a place to work safely.” –Maria Falcon, street vendor arrested April 2022

Maria Falcon was born in Ecuador and now lives in Queens. For over ten years, she has worked selling goods from a street cart. On April 29, Maria was on an outdoor subway platform in Brooklyn selling mangoes and melons from a laundry cart when two NYPD officers handcuffed and arrested her. She spent two hours in a police station.  She was partially strip-searched for weapons and drugs, her cart and goods were confiscated, and she was ticketed and released for ‘unauthorized commercial activity.’ Her daughter’s video of the arrest went viral.

Maria’s story is a snapshot in the political panorama of NYC street vending. As an informal sector of the local economy, largely fueled by the work of immigrants and people of color, street vending is regulated through city permits for carts and trucks. NYC caps the total number of permits granted, creating a huge waitlist and an “underground black market” in permits. For years, immigrant justice groups like The Street Vendor Project, and elected officials like Jessica Ramos, have fought to decriminalize street vending and empower street vendors, establish a fair and equitable permit process, and end police harassment of vendors.

In a promising step forward, a report and set of recommendations developed by a new Street Vendor Advisory Board (SVAB) are being embraced by the City Council and Mayor Adams. The SVAB, created in 2021 by City Council mandate, aims to balance the interests of street vendors, small businesses, community organizations, and consumers. It also recognizes that the street vending ecosystem in New York is a vibrant part of neighborhood life and a vital support to the economy.

In May, the Mayor publicly announced that the city will start implementing several SVAB recommendations including: repealing criminal liability for mobile food vendors; exploring the expansion of street vending opportunities in pedestrian plazas, city parking lots, and metered parking spots; and introducing business supports for street vendors through city agencies.

“For centuries, street vendors have been an essential part of the fabric of New York City. From the Bronx to Queens, street vendors ensure under-resourced communities have access to fresh, affordable food, commercial corridors have diversity of business, and tourists get the iconic New York City experience. And now, for the first time ever, street vendors are stakeholders in deciding the future of the industry … We look forward to continuing to work with Mayor Adams and the City Council to modernize the vending system, ensuring all street vendors are permitted, and cutting the red tape so our city’s smallest business can truly thrive.”