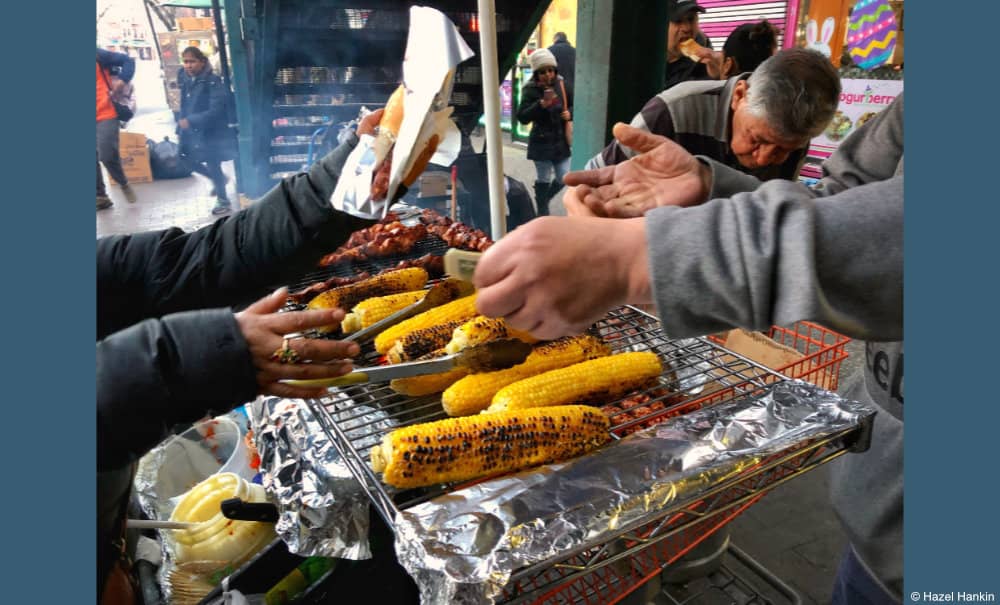 One of the joys of living in Jackson Heights is our vibrant street life, animated by a rich array of food carts and a lively culture of street vending. But behind this sidewalk cheer lies the reality of struggle for immigrant vendors, whose numbers have increased during the pandemic as economic life becomes more precarious. We report this week on the current impasse in NYC street vendors’ fight for legal rights and municipal support.

We also take a look at the housing justice work of Chhaya—a Jackson Heights-based organization serving local South Asian and Indo-Caribbean communities—in the wake of the fatal storm last year that killed 11 basement tenants, including families here in Central Queens.

Despite the passage of City Council legislation aimed at protecting their rights, NYC’s street vendors—almost all immigrants—continue to face daily harassment and disrespect by the city administration. Politicians’ solemn promises to provide new permits and fairer law enforcement have gone unfulfilled.

There are an estimated 20,000 street vendors in the city. Some envision street vending as a step towards a brick-and-mortar store—perhaps following the footsteps of the Arepa Lady of Jackson Heights, Maria Piedad Cano, who is legendary for parlaying a cart on Roosevelt Avenue into a popular restaurant on 37th Avenue. Many more vendors are just trying to survive, including thousands who lost jobs during the pandemic. A vendor in Flushing, who asked to be called Wong, told Documented:

“It’s really tiring and to be honest I don’t really want to be doing this but I can’t do anything else…. I’m pretty old and I looked for another job, but no one would take me. I just want to make some money to pay my living expenses and to operate in a legal way but I can’t get a license.”

Wong, like most other immigrant women street vendors, faces extra risks and burdens. Fifty-two percent of these women are primary breadwinners for their families; 32% are sole providers. Forty-four percent report feeling unsafe at work, because of fear of police or health inspectors, robberies, assaults and race or sex harassment.

Most food vendors are already licensed to serve and sell food; they’ve paid an application fee and passed an eight-hour health and safety course. Yet it’s almost impossible for these licensed vendors to get a license for their cart, because of a rigid cap imposed decades ago in the time of Mayor Koch. The long waiting list for a cart license has been closed for years. Nevertheless, with casual cruelty, the city is dispensing scores of $1,000 tickets for unlicensed carts or stalls. Many local vendors have also been arrested or had their property trashed by the Department of Sanitation.

When we last wrote about the street vendor struggle at the beginning of July, there was a feeling of cautious optimism among activists. Vendors had become better organized. Mayor Adams had endorsed recommendations by the Street Vendor Advisory Board, validating the vendors’ concerns and committing the city to a series of practical improvements. City Council legislation increasing the number of permits was due to take effect that month. The Department of Consumer and Worker Protection (DCWP) was supposed to take over the enforcement of street vending regulations, replacing the heavy-handed NYPD.

But since that hopeful time, aggressive ticketing of vendors has only intensified—now performed by two agencies instead of one. In an analysis of data from June 2021 to May 2022, City Limits reports that DCWP and NYPD together have issued nearly 2,500 fines, a 33% increase from 2019, the year before policies went into effect to supposedly reduce ticketing. City Limits also noted that Jackson Heights was the most ticketed zip code for vendors during the first year of DCWP enforcement.

On September 29, street vendors and supporters, led by the Street Vendor Project, marched to City Hall to once again demand justice. State Senator Jessica Ramos told ABC News that the vendors “are not criminals, they are hard-working people looking for dignity and looking for the legalization of their businesses.” In response, a DCWP spokesperson alleged that “unlicensed vending and vendors who flout the rules put New Yorkers at risk of everything from food borne illness to traffic crashes.”

As vendors struggle to maintain their livelihoods on the streets, Department of Health and Mental Hygiene (DOHMH) bureaucrats botched and delayed the release of desperately-needed cart licenses mandated by the City Council. DOHMH claims it will make the first batch of cart permits (now called “supervisory licenses”) available next year—the ones that were scheduled to be released last summer. 445 supervisory licenses will supposedly be released annually for nine years after that—a meaningful improvement, but still far below demand.

“One septuagenarian member of the Street Vendor Project recently got an application for a Green Cart permit after 15 years of waiting….The permit would allow her to sell fruits and vegetables in the South Bronx making a modest living for her family. But before she could become a legal vendor, her husband died. ‘I get to see this day that has finally come where I got a permit…and my husband wasn’t able to see it happen.’” –Mother Jones (October 2022)

2. The Aftermath of Hurricane Ida—Chhaya Responds

Just over a year ago, six inches of rain fell in a few catastrophic hours, as the remnants of Hurricane Ida passed through New York City. Eleven people drowned in their flooded basement apartments, many of them in Central Queens and most of them immigrants. Hundreds more basement dwellers lost their belongings and their only home.

Today, some of us have already forgotten the horror of the unprecedented flash flooding in early September 2021. But every household affected by the storm remembers. And the local immigrant-led organization Chhaya has, in the past year, amplified their fight for affordable, safe housing, and for the legalization of basement units that are brought up to code and secure. An estimated 31,000 buildings in Jackson Heights, Woodside, Elmhurst and Corona have “below grade” basement units, many of them rented out to immigrant workers and families, and many of the buildings owned by immigrant small homeowners/landlords.

Chhaya recognizes these basement apartments as a “vital part of the city’s affordable housing stock” that have been criminalized by the city’s archaic housing laws. Fighting for well-regulated, safe, and healthy basement dwellings is part of Chhaya’s broader commitment to housing justice for working-class South Asian and Indo-Caribbean New Yorkers. As founder of NYC’s Bangladeshi Tenant Union, Chhaya has been at the forefront of community organizing and political strategy to empower low-income tenants in immigrant neighborhoods like Jackson Heights—where their main office is located.

In March 2022, Chhaya and coalition partners in the BASE (Basement Apartments Safe for Everyone) campaign released a new policy initiative calling for:

Working-class immigrant communities in NYC are living at the intersection of climate change, a crisis of affordable housing, and radical health inequalities—including unequal vulnerability to displacement and death during extreme weather events like Hurricane Ida. Echoing Chhaya and the BASE campaign’s demands, a July 2022 report released by the Regional Plan Association calls for legalization of basement dwellings to increase safety and security, and for immediate investments in green infrastructure to mitigate storm damage and flash flood events. Both strategies are potentially life-saving transformations for immigrants living, literally, underground in Central Queens.