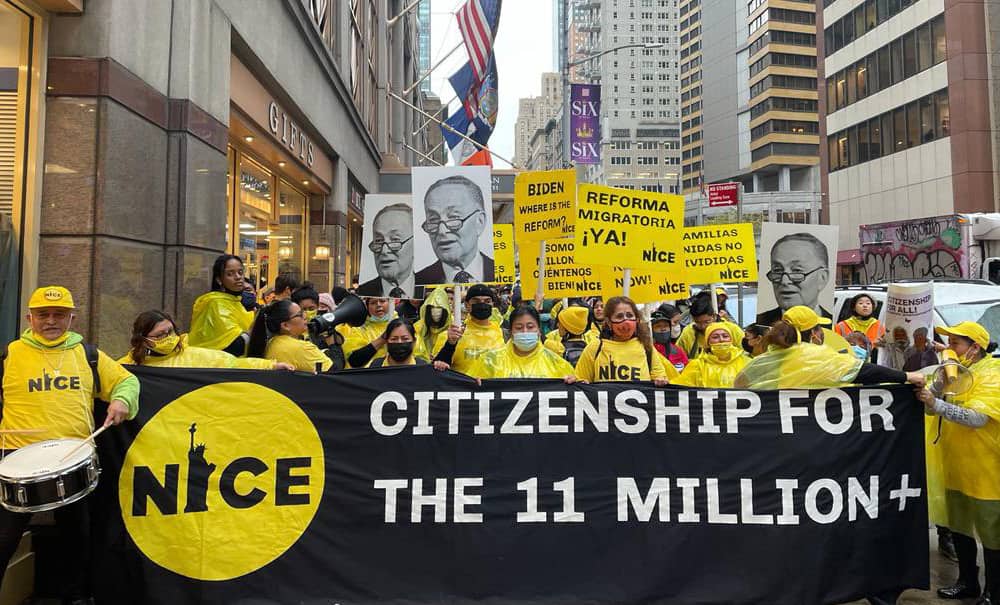 Welcome to our new readers who have signed up to receive the newsletter! Some of you may have seen us recently handing out our newsletter flyer on 37th Avenue and at the Farmers Market – we are excited to now have over 525 newsletter subscribers. Please feel free to share our subscriber link with friends, co-workers, local activists, neighbors, and family: https://jhimmigrantsolidarity.org/news/

This week’s feature article takes a look at the latest news on national immigration legislation. The news is not good. But the more political awareness we can build around what is happening, and the more solidarity we can offer in the struggle for collective security and a permanent home for undocumented immigrants—the closer we will get to that deferred promise of “… justice for all.”

“People who try to frame this as a win for the community need to work closer with undocumented immigrants… there’s clearly mass disappointment and confusion, and a sense of betrayal.”  –Manuel Castro,  NICE Executive Director

While the New York City Council will soon vote on making this city the largest US municipality allowing non-citizens to vote in local elections, the US Congress is offering us nothing more in immigration law than the halfhearted options they have already debated for decades. In mid-November, instead of providing a permanent road to citizenship as promised by Democrats, the House of Representatives included a proposal called “immigrant parole” in the Build Back Better bill. This parole allows a limited population of immigrants legal status and work permits for five years, with the possibility of a five-year extension. The Senate still has the option to include a more desirable option, changing the existing Green Card eligibility date (called Registry) from 1972 to 2010. This would create a pathway to citizenship because after five years a permanent resident can then apply to become a naturalized citizen.

Over recent months, New York groups energetically mobilized to remind Democratic legislators of their promise to create a pathway to citizenship for 11 million people. There were 11 days of action by NICE, Movement for Justice in El Barrio protested outside Senator Gillibrand’s office, newspaper ads were published, and rallies took place at Senate Majority Leader Chuck Schumer’s Manhattan office and at his home. A four-day #NoSleepTilCitizenship sleep-out with Adhikaar in front of Schumer’s Brooklyn home kept the pressure on, demanding a pathway to citizenship be included in the final Build Back Better (BBB) reconciliation package.

The House did not deliver that pathway on November 19. Not because of any true policy commitment that parole is actually the best solution; according to House Judiciary Committee Chairman Jerrold Nadler, “It’s our best option for getting past the parliamentarian,” who had rejected more expansive immigration proposals, arguing they did not meet the budgetary rules. In response, the New York Immigration Coalition, Make the Road New York, NICE, and other groups led an 11-mile march from 110th street in Harlem to Grand Army Plaza to urge Senate Democrats to fulfill their campaign promise. Adhikaar retweeted the statement from South Asian Americans Leading Together that the Senate must reinstate the pathway to citizenship, not the temporary reprieve of parole and time-limited work permits. DRUM retweeted United We Dream’s call for a pathway to citizenship.

Despite recent surveys showing over 55% of Republican voters support a pathway for citizenship and work permits and protections from deportation for those who have been here for over 20 years, not a single House Republican voted for Build Back Better. Elected Democrats spoke mostly about the need to do more. The first Dominican American to serve in the House of Representatives, Harlem’s Adriano Espaillat, noted that undocumented workers contribute significantly to our nation’s pandemic recovery and should not be left behind: “[W]e now urge our colleagues in the Senate to further this work by reinstating a pathway to citizenship for the millions of Dreamers, TPS holders, farmworkers, and essential workers who are counting on us to do the right thing.”

Make The Road NY and NICE thanked Espaillat, along with AOC and 10 other NYC Representatives, for signing a letter calling on Congress to fulfill its promise for immigration reform. The letter argues this “promise three decades in the making still hangs in the balance”; the signatories urge the Senate to refuse this temporary measure:

“Immigrants have sought relief from the precarity of jumping from one temporary status to another in the only country they can call home. Another temporary status would merely extend this precarity.“ – Letter to the Senate from 91 members of Congress (Nov 22, 2021)

Make The Road, NY posted a set of infographics showing how temporary parole and registry are very different, and reminding members to ignore scam offers to apply for either proposal since they are not yet laws.

As JHISN member Rosalinda Martinez notes, “11 million people who are present now working ‘clandestinely’ are still not accepted as citizens, so as not to pay them benefits and cut their rights as Workers. Rather, they do not have the status of workers, at any moment they can detain and deport them as if they were disposable, like poisonous animals.“ Passing BBB with temporary parole reinforces the problematic good vs bad immigrant trope and merely postpones for many people the threat of deportation from now until some time in the very near future, possibly as soon as September 2031. Neither parole nor registry are radical left policies, nor are they new to the immigration discussion. Registry was last used 35 years ago, by the first Make America Great Again administration of Ronald Reagan. Millions of people were given a path to citizenship, while many others were detained or deported, and the criminalization of undocumented people increased.

Those who support parole may believe most undocumented people don’t have much to fear under a Biden administration, especially if parole grants many the security to live and work safely in this country. However, millions of families and individuals will still face persecution from ICE and Border Patrol because even recent rules under the current president do not guarantee their security. As Lena Graber, senior staff attorney at the Immigrant Legal Resource Center notes, Biden’s ”guidelines gave officers so much discretion that enforcement actions would not look much different from those during the Trump administration.”

Even a broadly popular program like DACA, which is still being litigated in the courts, could be eliminated by next year. And the Biden Administration, which declares its support for DACA, may be about to complicate the program: DHS took public comments from September to November about a proposed change to create multiple DACA application processes. One application includes work permission and one does not, which could lead to confusion, bad guidance, and a situation where someone discovers that they made the wrong application choice for their future needs.

AOC has noted that some national immigrant advocacy groups have actually hampered the negotiating process on BBB, resulting in parole replacing registry as the Democrats’ proposal in the spending bill. Many of these groups are not grounded in immigrant communities or do not have undocumented members in positions of power. By way of contrast,  NICE has made clear “Our members are ready to continue to fight for #citizenship4all! after a packed member meeting, we are recommitting ourselves to demand @SenateDems to ACT and include a #pathtocitizenship in #BuildBackBetter LET’S GO!”