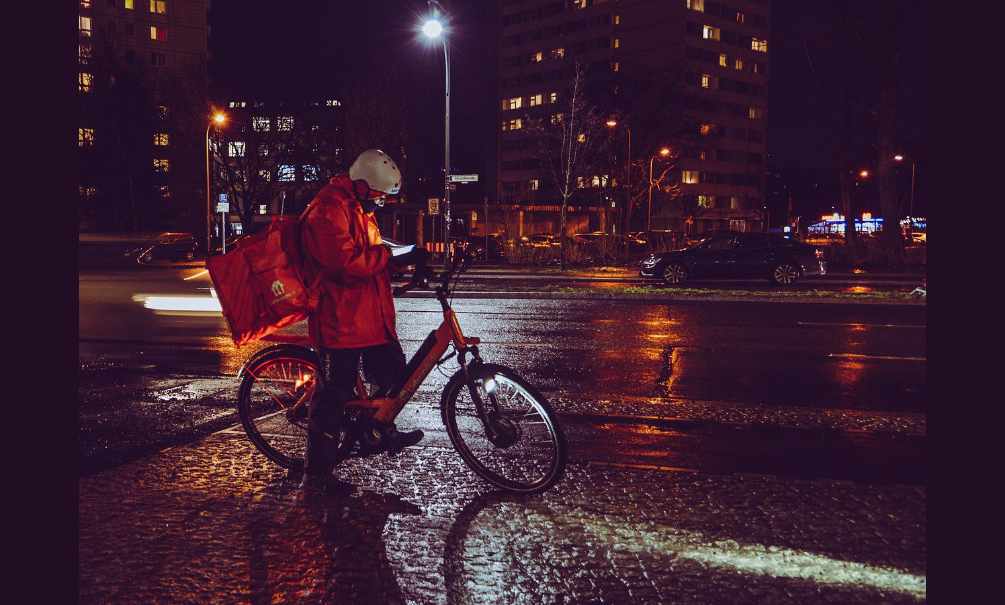 One of the many New Year’s celebrated in our neighborhood has just passed. This turning of the wheel of time also marks the return of Covid as an immediate and unequal threat. ‘How do we create solidarity during a global pandemic?’ JHISN asked in one of our first Covid-era newsletters in March 2020. At the start of this troubled new year, we want to honor all of our readers who have—in so many ways, seen and unseen—tried to answer that question with how you live, with what you love, with the kind of world you long to create.

Our newsletter looks at the mourning and mobilizing of NYC immigrant workers whose lives are literally on the line in the risky, low-wage business of food delivery. We then report on the most recent immigrant-led campaigns to protect essential workers in NY State, even as the visibility of their work starts to fade and their exclusion from government support continues.

1. Deliveristas: Risking Death on Our Streets

In a more just city, in a happier time, immigrant food delivery workers would be in the mood for celebration. After all, after years of militant organizing, Los Deliveristas Unidos (LDU) and their allies have won a stunning victory, with the passage of new laws—effective starting this month—that finally give workers the use of restaurant bathrooms, minimum payments per trip, more disclosures about tips, and other crucial gains.

But bike delivery is a very dangerous job, and NYC deliveristas are still being killed and wounded in collisions and robberies. Half of all surveyed workers have been in an accident while working; more than half have been robbed or physically assaulted. Recent deaths within their ranks have hit deliveristas hard. And so satisfaction for progress made can only be mixed with grief, and with collective determination to keep organizing for better conditions. 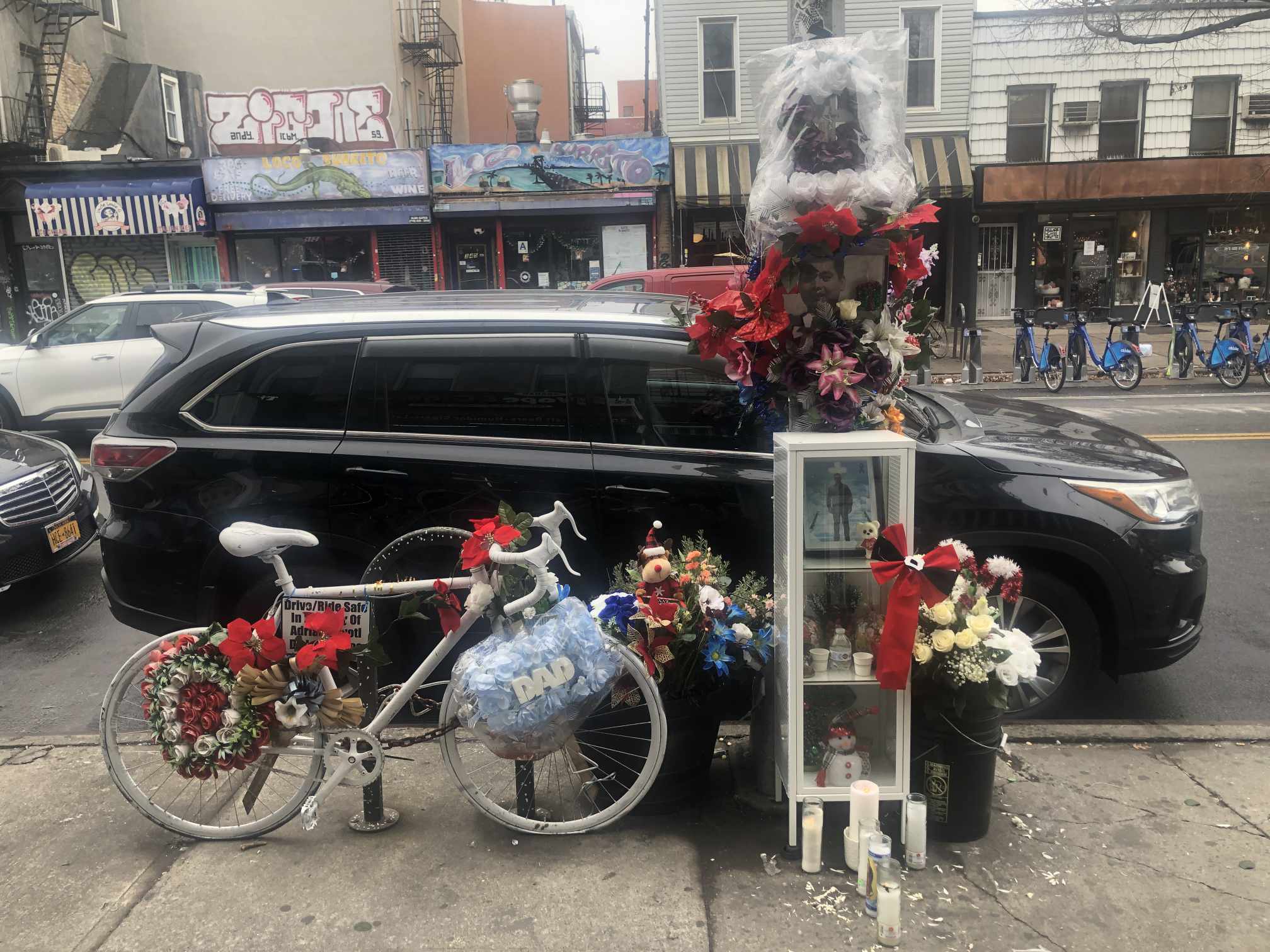 In a December 18 Facebook post, the Jackson Heights-based group DRUM (Desis Rising Up and Moving) expressed sadness and anger about how New York treats the deaths of delivery workers:

“On Thursday, the Manhattan District Attorney’s Office released information about the arrest of the man who is charged with the death of Borkot Ullah—Delivery worker and DRUM member who was killed while making food deliveries this past July.

“Borkot was struck by the driver who ran the light while being chased by the police. The driver was speeding and is responsible for Borkot’s death. But it is also illegal for the NYPD to engage in high speed car chases within the city to prevent exactly these situations. There is still no word about the officers involved in the chase who are also to blame for Borkot’s tragic death….

“What does justice look like for immigrants who are forced to leave their homelands and work long hours in unsafe conditions for corporations that treat them as disposable? Do we believe pursuing justice through a system that is defined by punishment and retribution is the way forward?

“We are mourning. Mourning the loss of Borkot Ullah and the loss of Xin Long Lin. We are hurting. Yet, in our hurt, we know that there has to be a better way.

“By coming together to encourage safety and strengthen the bond between each other, delivery workers are working to make sure no more workers die like this. They are building solidarity as Black, Latinx, South Asian, Arab, African, East Asian and other people of color to build collective power and change their conditions to fight for the future of all delivery workers.”

On December 31, more than 2,000 protesting members of Los Deliveristas Unidos rolled through the streets of Manhattan, fighting once again for better working conditions and pay. They are now bolstered by representation and legal support from service worker union SEIU Local 32BJ. One of the deliveristas’ main demands at the demonstration: more protected bike lanes.

What happened to our collective recognition of the food, care, and necessary production and services provided by essential workers? Almost two years into the pandemic, public consciousness—including a renewed class consciousness—of whose work is really essential seems to be fading. Even as the latest threat from a virulent Covid mutation once again puts essential workers, and their households, at greatest risk of exposure and sickness.

An estimated 74% of undocumented workers in the US are essential workers. The vast majority of them have been excluded from the government’s pandemic relief efforts, including enhanced unemployment benefits and stimulus payments. A recent analysis by the Institute of Taxation and Economic Policy spotlights the discriminatory financial effects of this exclusion: a family of four with two US citizen breadwinners earning a combined annual income of $24,000, would receive $35,470 more in government pandemic benefits during 8 weeks of unemployment than a similar family with two US children and two undocumented working parents.

In response to this punishing aid gap, New York’s essential and excluded workers got organized. Led by the Fund Excluded Workers Coalition (FEW), including Make the Road New York, immigrant activists won a historic $2.1 billion fund for excluded workers in the state budget last spring. But the fund ran out in just two months. Thousands of eligible workers in upstate and rural areas didn’t even have a chance to hear about the fund and to apply. An estimated 40,000 applicants were denied simply because the fund had been exhausted. Now immigrant activists are calling on Governor Hochul to dedicate $3 billion in additional state funds to fully address the pandemic aid gap for undocumented workers.

A new mobilization organized by the FEW Coalition, #ExcludedNoMore, has also been launched to create a permanent statewide solution to systemic inequalities in unemployment insurance for immigrant workers and others who labor in low-wage, precarious industries. #ExcludedNoMore calls for a separate and parallel NY State unemployment insurance program that would serve domestic workers, street vendors, day laborers, and other workers historically excluded from unemployment compensation.

On New Year’s Eve, the FEW Coalition tweeted out, “Thousands were left behind with no relief this season,” asking members to light a candle in solidarity with excluded workers everywhere. As 2022 begins, New York’s eviction moratorium is ending, along with Biden’s child tax credit that helped millions of families, including immigrant households, keep children fed and pay the bills. How can we support essential workers in the ongoing struggle for economic justice? What essential lessons from an unforgiving pandemic must never be forgotten?