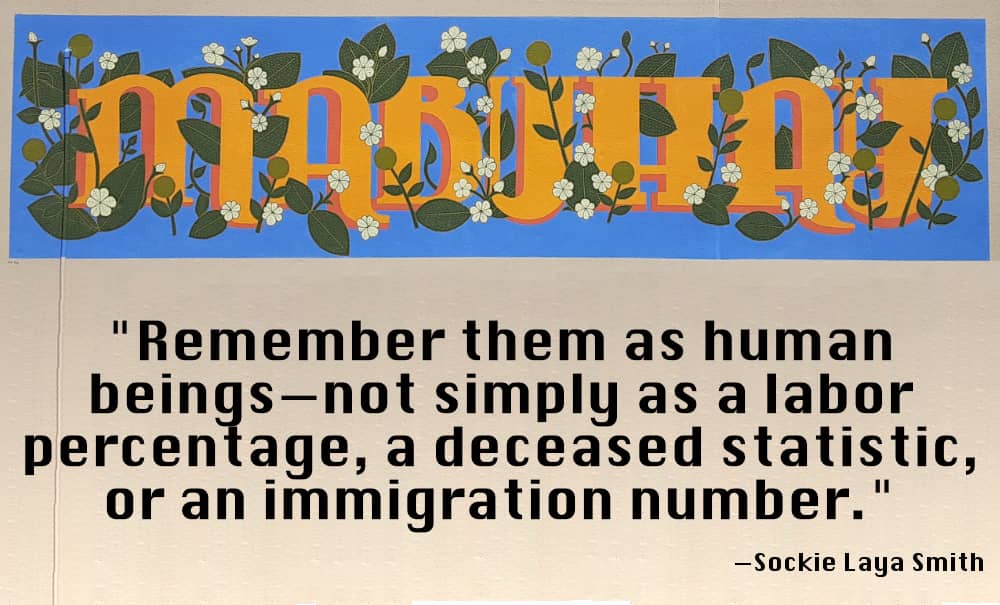 As we approach the one-year mark of pandemic life in the US, with vaccine distribution promising hope and also delivering predictable class- and race-based inequality, JHISN offers a look at history and the near future. Behind the recent headlines reporting the horrific number of Filipino health care workers who have died from COVID-19, we recount a less talked about history of US colonialism and the out-migration of health care workers from poorer to richer countries. We then examine how immigration activists are reacting to the new administration’s sweeping proposal for future immigration legislation.

Like us, you may be looking for a path toward spring, without forgetting the pandemic season we have dwelled in together—and which is not over. We hope the newsletter can provide a few useful signposts.

Three times as many Filipino health care workers have died here in the US than in the Philippines. So right away we know there’s something wrong. —Jollene Levid, founder of the memorial website Kanlungan

A tide of grief is washing over Filipino communities around the country, as COVID death and illness falls relentlessly and disproportionately on their members working in health care. Four percent of nurses in the US are of Philippine ancestry, but they make up almost one-third of all nurse deaths from the pandemic. So far 178 Filipino healthcare employees are known to have died, dozens of them in New York City alone. Serious COVID illness is widespread among Filipinos working in health care, including doctors, hospital staff, and home health aides. This heavy toll is another bitter inflection point in the long history of colonial rule and racist discrimination inflicted on the Filipino people.

The US wrested the Philippines away from a fading Spanish Empire in 1898, initiating “one of the most brutal military occupations in American history” (J. Ditz, HuffPost). Intent on crushing the Filipino independence movement, US occupiers cemented their ownership through a vicious 15-year counterinsurgency war, employing widespread summary executions, torture, and concentration camps. Estimates of Filipino deaths at the hands of the US invaders range from hundreds of thousands to as many as a million people.

Colonial administrators combined vicious repression with paternalistic social programs to “uplift” the population. Catherine Choy’s definitive book about the complex history of healthcare colonialism in the Philippines, Empire of Care, reports that the imperialists called the occupation “benign assimilation.” They insisted that the colonized population needed US intervention to overcome ‘uncivilized’ dirt and disease. Starting as early as 1907, English language nursing schools were established to train Filipinos according to Americanized medical protocols, targeting the recruitment of women students.

The training schools helped launch an enduring pattern of emigration by Filipino nurses, who left home to staff health care systems around the globe. After Philippine independence in 1946, nurses eventually became one of the country’s main ‘exports,’ praised by the government as “national heroes” for the money they sent back home. Remittances by migrant workers—mostly healthcare workers—now make up roughly 10% of the gross national product of the Philippines, to the tune of 15 billion dollars a year. At times, including during the current COVID crisis, this out-migration has created devastating and deadly nursing shortages back home.

Large numbers of Filipino nurses first came to the US after 1965, when an explicitly racist, anti-Asian immigration quota system was replaced by the Immigration and Nationality Act, which included “skills-based” provisions. Demand for nurses accelerated with the passage of Medicare and Medicaid, and again during the 1980s AIDS epidemic. Many white women in the US left nursing and fought their way into previously male-dominated professions, creating a further shortage. Meanwhile, economic crisis, devaluation of the peso, and the rise of political violence in the Philippines pushed more workers to migrate. By 2018, there were 145,800 Filipino registered nurses, along with many other Filipino health care workers, living in this country.

As migrants of color in the US, and mostly women, Filipino health care workers have been concentrated in the “front line of the front line” health care jobs: critical care, acute bedside care, elder care, surgical care, etc. This is a source of pride to many of the workers, but has had dire results during the pandemic, made even worse by the criminal withholding of adequate personal protective equipment by a profit-hungry medical system. The disproportionate death statistics, in other words, are no accident.

Last June 12—Philippine Independence Day—residents of Woodside’s “Little Manila” district unveiled a mural on the wall of Amazing Grace restaurant to honor Filipino health care workers. Incorporating a traditional Tagalog salutation—’Mabuhay!’ (or ‘to life!’)—it was painted by local artists and community members using details and themes from Philippine culture. Activist Sockie Laya Smith read the names of Filipino healthcare workers who had died from COVID-19. Speaking of the mural, Smith said, “This is to remember them as human beings—not simply as a labor percentage, a deceased statistic, or an immigration number. We thank you, say thy name. Mabuhay!”

Last month, the White House presented a Bill to Congress promoted as a ‘new’ system of immigration and border control. But the Citizenship Act of 2021—with its clumsy official title, ‘To provide an earned path to citizenship, to address the root causes of migration and responsibly manage the southern border, and to reform the immigrant visa system, and for other purposes’—reads partly like pre-Trump business as usual.

Any bill that is not a fear-mongering, immigration-halting, proudly racist policy crafted in the malevolent spirit of Stephen Miller is a step forward. But that alone doesn’t guarantee a real course correction from decades of problematic immigration policies. Some of the proposed changes, like replacing the word ‘alien’ with ‘noncitizen’, are minor steps toward addressing the Department of Homeland Security (DHS)’s systemic dehumanizing policies and procedures. And yet there is still no clear legislative path to eliminating the rampant racism, white supremacy, and misogyny inside DHS’s Border Patrol and ICE.

Non-governmental organizations have done their best to summarize the details of the Citizenship Act and explain the scope of its changes. The centerpiece of the Act is an 8-year ‘earned path’ to citizenship for all 11 million undocumented US immigrants, and an expedited 3-year path for Dreamers, Temporary Protected Status holders, and some farmworkers. The New York Immigration Coalition celebrates the activist work that inspired many specific features of the bill. Angeles Barrancos, member leader of the NJ chapter of Make The Road, notes that the “introduction of the Citizenship Act of 2021 demonstrates the strength of our movement.” Frank Parry, founder of “America’s Voice” which created DHS Watch in 2018, states: “We have to give credit to the people who have been organizing from the ground up for the last 20 years” for the existence of the Biden Bill— their work made “what once seemed a little radical seem common sense.”

At the same time, immigration and other progressive groups have made clear that there is more to be done, and to be demanded. Well-known activist Ravi Ragbir, co-founder of NYC-based New Sanctuary Coalition, said in early February, “Even though the Biden administration wants to stop deportations, an enforcement agency like ICE has the unchecked authority and power to continue doing so.” Members of the Congressional Black Caucus have expressed outrage that DHS is blatantly ignoring new White House directives, as ICE continues to terrorize Black immigrant communities. For instance, ICE deported a New York immigrant to Haiti, although he was not born there and had never lived there.

South Asian Americans Leading Together (SAALT), which includes local groups like Adhikaar, Chhaya CDC, and DRUM, acknowledges the “possibilities this legislation presents.” They also urge Congress to address some of its “harmful provisions” like the exclusion of immigrants harmed by a racist criminal legal system, or discouraging immigrants from accessing vital services as they move toward citizenship. SAALT also calls on President Biden to “transform the immigration system to explicitly account for climate change, religious persecution, and growing right-wing fascism.”

Looking at the foreign policy elements of the 2021 Act, Alberto Velázquez Trujillo of Faith in Action in Central America says that the $4 billion in promised ‘investment’ in the region must also have accountability checks. “If Biden wants to help Central America, he needs more discernment about where the money is spent. If he just gives money to the governments [as administrations have done in the past], things will remain the same.”

In sum, there is no settled summary of the ambitions, gaps, and dangers in the proposed 2021 Citizenship Act. All that is unfolding, in real-time. The ACLU notes “This legislation provides one of the most far-reaching pathways to citizenship and legal residency in recent history.“ But importantly they voice concerns too:

“[W]e must … ensure that Congress passes legislation that does not import the wrongs of the broken and racist criminal legal system, nor lead to more wasteful funding for technology at the border that would undermine everyone’s right to privacy.” —N. Shah, ACLU Statement, 2/18/21