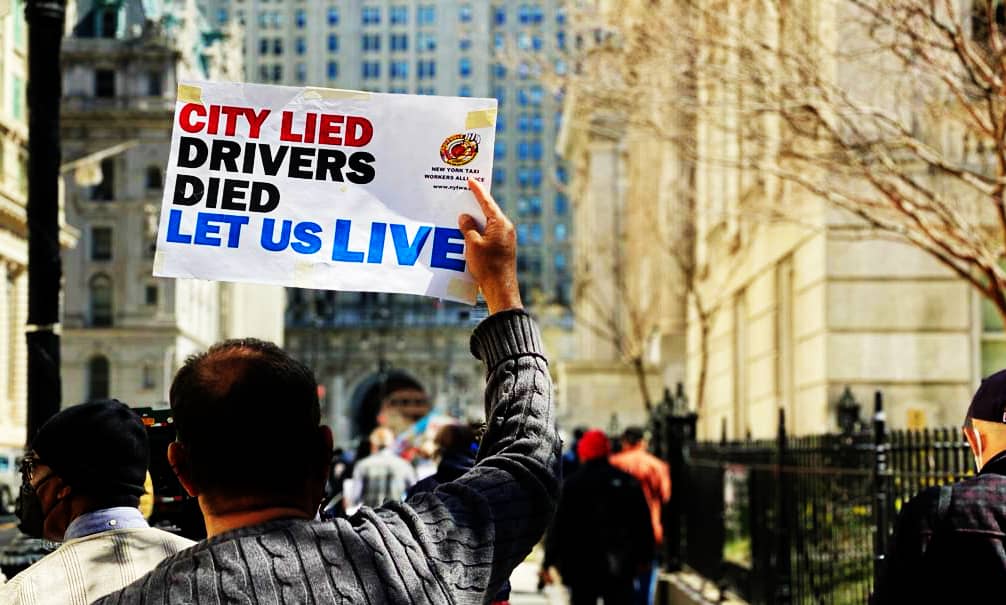 Greetings to each and all of you, our readers, as we continue to find our way in an unfolding pandemic. For some of us, this is a season of vaccines and anticipated freedoms. And for some of us, especially South Asian immigrant families in Jackson Heights, it is a time of brutal sorrow. The ravages of Covid-19 burn across India, Nepal, and beyond, as global inequalities in wealth and the reality of vaccine apartheid lead to obscene differences in vulnerability and death. Thank you for continuing, with us, to learn and invent what solidarity looks like in this truly global pandemic.

We turn this week to examine how one predominantly immigrant workforce—taxi cab drivers in NYC, many from South Asia, and many residents and neighbors here in Queens—is fighting for their survival.

If you are the owner-driver, you are handcuffed to that wheel and without a real solution you are literally facing a life sentence to debtors’ prison.   —Bhairavi Desai, New York Taxi Workers Alliance

Drowning in debt and devastated by Covid, New York’s yellow cab drivers—almost all immigrants—are carrying out a long-term, militant campaign for relief and accountability from a city that so far has systematically betrayed their interests. United under the banner of the New York Taxi Workers Alliance (NYTWA), they are demanding justice and resisting a cynical maneuver by Mayor de Blasio aimed at undermining their struggle.

From 2002-2014, the City’s Taxi and Limousine Commission—packed with Guiliani and Bloomberg cronies—oversaw a massive, artificially-created bubble in the price of taxi medallions (the permits required to operate yellow cabs). Bankers and brokers connected to city officials grew rich bidding up medallion prices—in some cases pushing their price from around $200,000 to over a million dollars. Drivers were “knowingly misled” by the City; encouraged to take out predatory loans as a supposedly unbeatable investment in their future. The Bloomberg and de Blasio administrations took advantage of the bubble to harvest hundreds of millions of dollars from sales of taxi medallions and by collecting taxes on private sales. They used this money to balance their budgets and fund favored projects.

But when the bubble burst, drivers were left with impossible levels of debt. At one point, medallion prices dropped to less than $150,000. Today a medallion once again sells for about $200,000; meanwhile, the average driver owes banks and finance companies more than $500,000. Almost a thousand drivers have gone bankrupt; several have died by suicide.

Even as yellow cab drivers reeled from this personal and financial disaster, the City allowed Uber and Lyft to flood the city with tens of thousands of “ride-hailing” cars—yellow cab competitors, who weren’t even required to buy a medallion. This was a body blow to the yellow cab business, which continues to be tightly regulated. In 2018, the City government finally put some caps on the number of so-called “app” cars. But tremendous damage had already been done, once again, to the livelihood of yellow cab drivers.

As if this wasn’t enough misery, the pandemic caused taxi usage to plummet. And like other essential immigrant workers, many taxi drivers and their families became sick or suffered fatalities.

But the NYTWA has refused to buckle under. Showing resilience and determination, they are using every available tactic to seek justice. They have demonstrated and lobbied and motorcaded to D.C. They shut down the Brooklyn Bridge twice, blocking it with parked cabs. They took over Times Square. They demanded and won the right to be vaccinated as essential workers. As the central focus of their struggle, the NYTWA formulated and is now promoting a comprehensive plan for taxi driver relief, which has been introduced in the New York legislature and taken up by progressives across the state and nationally. It calls for the City to guarantee and help restructure unsustainable loans. It also puts a limit on monthly mortgage payments and gives drivers in foreclosure a chance to regain their medallions. In the meantime, the NYTWA also reached out and united with the “app drivers,” who have their own problems with predatory corporations. In fact, it was an NYTWA lawsuit that won full employee unemployment pay for Uber and Lyft drivers.

Finding himself under sustained political and legal pressure, in early March 2021, Mayor de Blasio suddenly unveiled his own so-called “relief” plan. Denounced as pathetically inadequate by the NYTWA, it proposes using some of the City’s expected federal coronavirus stimulus money to float $20,000 loans for some individual drivers, and $9,000 to help restructure medallion loans. As taxi workers point out, most of this money would go straight into the hands of lenders and debt collection agencies, without making a meaningful dent in drivers’ heavy financial burdens. “The mayor’s plan is a disgraceful betrayal from a city that already has blood on its hands,” said Bhairavi Desai, Director of NYTWA. Desai commented further this week to JHISN: “We remain vigilant about finding a solution that is comprehensive, ever-lasting and, fundamentally, one that is communal. We refuse to be divided and take an individual approach as the city has done. None of us survive if any of us fail.” For his part, De Blasio has so far flatly refused to consider NYTWA’s proposal, even though it would cost less than his plan.

Cab drivers show no signs of being diverted from their goals by the mayor’s maneuver. Dozens of demonstrations have been organized in front of City Hall, at Gracie Mansion and in Albany, since de Blasio’s flawed plan was announced. Politicians, including Jessica Ramos, Chuck Schumer, Scott Stringer, and Letitia James, have come out strongly in favor of the NYTWA relief plan. A class-action suit by drivers, demanding restitution of $2.5 billion, may add to the pressure for a fair settlement by the City. Taxi drivers’ long struggle for justice seems to be catching its second wind.

I really don’t believe this is America. Because I know this country. The justice will be delayed; but I’m confident it won’t be denied. One day. One day the truth will come out, and all these things they did wrong to us because we are immigrants, they will pay for it.  —Mouhamadou Aliyu, Taxi Driver