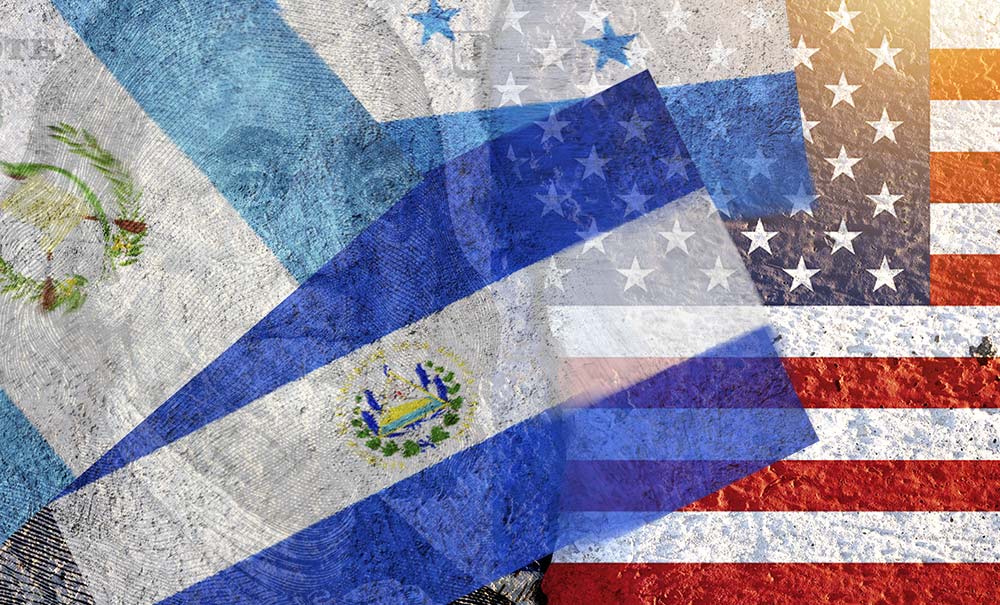 Every month, tens of thousands of migrants are detained along the US-Mexico border. Right now, most of those migrants are refugees from the Northern Triangle of Central America—El Salvador, Honduras and Guatemala. When they get to the border, these folks have already endured a long, dangerous journey, covering thousands of miles. They've struggled through perilous desert crossings. They've clung to the top of freight trains in baking heat and freezing cold. They've faced very real odds of being kidnapped or raped. They've borrowed money or used their last resources to pay off coyotes and corrupt officials. Once they arrive, they are brutalized by border agents and a dehumanizing, racist detention system.

Harsh Life in the Northern Triangle

People don't undertake a journey this terrible for no reason. The reality is that El Salvador, Honduras and Guatemala have become unbearable for these refugees, no matter how much they might wish they could stay in their homes.

Poverty is widespread in the Northern Triangle. Parents must watch their children go hungry. Family farmers are forced off their land, flooding into cities where there are no jobs. Homelessness is common.

Violence is out of control. Many of the people leaving the Northern Triangle have had family members killed, have witnessed murders, or have been themselves threatened with rape and other deadly violence in their home countries. Young people are subjected to forcible recruitment into street gangs, with their families as hostages. The military and police rule society with a heavy hand.

How We Got Here

Why is life so difficult for so many Central Americans? To a large extent, the blame lies with the policies of the US government, and with the power of US corporations.

For over a century, the US has acted like Central America was its private plantation. The US has invaded the region over and over. It has backed corrupt military dictators, overthrown democratic governments, armed and trained vicious death squads. The CIA has manipulated and assassinated its way up and down Central America. And US economic policies have destroyed the livelihoods of millions of people.

Here are just a few examples of US political-military intervention in the Northern Triangle:

The Pattern Repeats in Guatemala

Running through all of the US violations of sovereignty and human rights in the Northern Triangle, there 's always been an economic thread. The almighty dollar is behind it all. US policy has been formulated to serve the US corporations that profit from Central America’s resources and labor. For instance, several brazen US interventions in Guatemala and Honduras were specifically intended to benefit the United Fruit Company (now Chiquita Brands), whose low-wage fruit plantations were fantastically profitable.

Maybe the best way to sum up the history of US colonialism in Latin America is to quote Marine General Smedley Butler, who helped lead US military campaigns in Honduras, Nicaragua, Mexico, and Haiti. In the 1930s, he wrote: "I spent most of my time being a high-class muscle man for Big Business, for Wall Street and for the bankers. In short, I was a racketeer for capitalism."

Over the last few decades, the US pressured and bribed Central American politicians to join what is called CAFTA-DR. CAFTA, like NAFTA, is a trade pact designed to override national laws, favoring the interests of large multinational corporations. Given the economic and power imbalances in the Americas, we shouldn’t be surprised at how that worked out for Central America. US banks and commercial interests have now taken over large parts of the financial systems and retail trade in the Northern Triangle, and US manufacturers have overwhelmed local industries.

But maybe the biggest effect of CAFTA has been to drive small farmers off their land. Under CAFTA rules, small farmers can't possibly compete with well-financed, large-scale global corporate agribusiness owned by investors from the US and other wealthy countries. To give one example of the impact: Not long ago, Honduras used to be a net exporter of agricultural products. But now it imports more food and other farm goods than it exports.

CAFTA specifically forbids any national legislation by Central American countries that would allow them to protect their small farmers—even farmers trying to sell products to their own local markets. Hundreds of thousands of family farmers have fled out of the countryside, flooding into the cities, where they find little but unemployment and crime.

On top of all this is the impact of the US-fueled drug trade, and the US's "War on Drugs," each of which lines the pockets of Miami bankers while undermining one Latin American society after another. Gangs like MS-13, which was exported from Los Angeles to the Northern Triangle by the US government, thrive in this environment of chaos and corruption.

There’s a Word for This

US policies and corporate greed have left a lasting legacy of poverty, civil strife and social violence. Every time the people of Central America resist, the heavy fist of the US and its military puppets slams down on the peoples’ movements. Demands for fair trade by Central American countries are met with economic blackmail by global banks and the US, intent on enforcing the wishes of the large corporations.

There's a word for this relationship. The word is imperialism. This parasitic relationship between the US and Central America has been a constant destructive force for generation after generation, during both Republican and Democratic administrations. The whole time, it’s been justified by naked racism and victim-blaming. When we see desperate people from the Northern Triangle arriving at the Mexican border, we must recognize that it’s US imperialism that has forced them to make this painful exodus.

The Responsibility of US Citizens

Under international law, and in light of basic decency, all countries are expected to provide asylum for people seeking refuge from persecution, war, social violence and disasters. But US citizens have a special responsibility to give refuge to the people that US imperialism—in its cold-blooded search for profit—has cruelly driven from their homes. Citizens have a special obligation to defend the human rights of Central Americans, and to repudiate every racist attempt to demonize and dehumanize them. And finally, beyond the immediate human rights crisis at the border, US citizens have every moral and practical imperative to help rebuild the countries that the US has pillaged and devastated.

For Further Reading and Study:

A Century of U.S. Intervention Created the Immigration Crisis

The devastating effects of American intervention in Guatemala

The Impact of CAFTA: Drugs, Gangs, and Immigration

Video: The War on Democracy

CISPES: Community in Solidarity with the People of El Salvador

One comment on “How the US Created the Refugee Crisis”