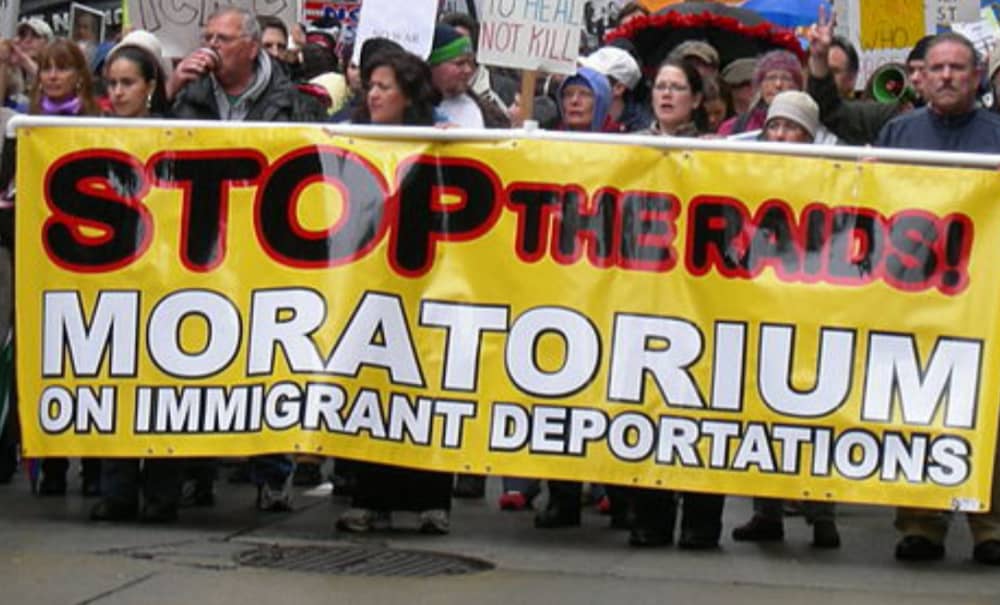 We live in a neighborhood that celebrates an extraordinary range of new years. Sweet new year’s greetings to all who mark time by the Gregorian calendar. This month we also mark a change of political seasons: a regime that began with howls of white nationalism now explodes with the fist of fascist violence. As Trump is forced from executive power, with the new administration still an unknown quantity, our newsletter focuses on the urgent demand for a moratorium on the deportation and detention of US immigrants. Also, we offer a close-up look at the grassroots work of one local immigrant justice group that continues to organize power and political solidarity during the pandemic.

For those of you who are financially able, please consider donating all or part of your $600 Covid relief check to JHISN’s ‘Neighborhood Emergency!’ fundraising campaign. The campaign directs all donations to six immigrant-led community groups. If you can afford to donate all $600, that’s $100 for each of the six immigration groups!

1. What Kind of Moratorium?

President-elect Joe Biden’s repeated promise to implement a 100-day moratorium on deportations came about because of sustained grassroots pressure. The demand for a moratorium on deportation and immigrant detention has been a common theme of immigration justice activists for years. By agreeing to a moratorium, Biden has elevated it as a mainstream political issue. The question now is what his moratorium will look like, and whether it will be more than symbolic. Will the moratorium respect and address the recent history of specific demands by immigration activists?

So how will the new administration incorporate–or sidestep–this recent history of moratorium demands? 100 days doesn’t seem like much time to sweep all the white nationalists and sadists out of ICE and the Border Patrol, let alone substantially reform the immigration system. Will the new administration make exceptions to the moratorium that undermine its force? Will the current mass incarceration of immigrants waiting for their hearings continue during the moratorium? What happens on Day 101?

There are some worrying signs. Some of Biden’s advisors seem to resent pressure they are getting from immigration activists, claiming activists are “too adversarial.” According to NPR, “there are a number of people within Team Biden who are just uncomfortable with a lot of the policy initiatives that they recommend.” One of the biggest points of contention is the deportation of immigrants with criminal records. During the “Deporter-in-Chief” Obama administration, thousands of people were ripped apart from their families and deported for minor offenses. NPR reports that Biden has met repeatedly with “moderate” immigration groups like the National Immigration Forum (NIF) that continue to promote the divisive discourse of “good immigrants” vs. “bad immigrants.” This distinction has served as a pretext for racist demonization and massive deportation programs for decades, under both Republican and Democratic administrations. NIF’s ‘moderate’ position is that immigrant communities don’t want to “see a moratorium on the deportation of public safety threats.” A look at the NIF’s Board of Directors shows the weight of corporate money behind this position.

There are some hopeful signs for Biden/Harris immigration policy, however. They have endorsed creating a roadmap to citizenship for 11 million undocumented immigrants, and a series of other progressive steps, including fortification of DACA and Temporary Protective Status (TPS). Although he hasn’t included immigrant detention in his promised moratorium so far, Biden has called for closing private immigration prisons and for freeing most immigrants awaiting ICE hearings. It appears that some immigration justice arguments have gotten through to him. But clearly, there will be an ongoing struggle among Democrats over the nature and purpose of a moratorium and many other aspects of immigration policy. How can we make sure that the collective voices and demands of immigration activists are heard, and make a real difference, in that struggle?

2. Rising Up & Moving in a Pandemic – DRUM Builds Community Power

Crises transform society. We will never return to the way things were. While billionaires have increased their wealth by $584 billion, the people and movements must continue to fight in order to ensure that we shape the direction of our society. We need to mobilize a base of people that are ready to engage in collective efforts to restructure society in ways that serve human needs and … a culture of solidarity and mutuality. DRUM report 2020

As the pandemic shut down everyday life in March 2020, local immigrant justice groups were faced with a nightmare dilemma: how to meet crisis-level community needs just as you had to close up your office, end face-to-face organizing, and conduct all work remotely? Desis Rising Up & Moving (DRUM)—with their office in Jackson Heights and with South Asian and Indo-Caribbean members based in Queens, Brooklyn, and the Bronx—just published a Community Report chronicling their extraordinary response to this nightmare.

Pivoting their work “to meet people’s realities,” DRUM designed and launched a new campaign during the pandemic: Building Power & Safety Through Solidarity. The campaign aimed both to address members’ urgent needs concerning food, health, housing, money and to mobilize political analysis and collective empowerment to address deeper histories and structures informing the crisis. Presenting stories, artwork, analysis, biographical sketches, statistics, and concrete strategies and recommendations, the Community Report offers a model for how to organize, and even strengthen membership, during a devastating health and social emergency.

As women members of DRUM built rent strikes in their own buildings, they also built women’s power and challenged gendered conventions of domestic labor. As mutual aid networks delivered food and direct assistance, they created relationships that can be mobilized to defend against evictions or abolish ICE. As DRUM reached out to members, in their own languages, about safety protocols and preventive measures against Covid, they also educated about the history of hospital closures (18 NYC hospitals closed down) and the structures of austerity and privatized health care that left a public hospital like Elmhurst vulnerable to being quickly overwhelmed by the pandemic.

After asking individuals about their basic needs and providing relevant updates about policies impacting their lives, we agitated members to make clear the structural factors that led to the current crisis. Agitation served as a bridge connecting their material realities to the need for organizing for collective liberation. It provided an opportunity to reflect on why the richest country in the world was facing the worst crisis. —DRUM report 2020

During the six-month-long campaign, DRUM made over 12,075 phone calls and talked with 2,175 people who expressed interest in becoming a DRUM member. These numbers are remarkable. But the real story of the Building Power & Safety Through Solidarity campaign is how DRUM met the crisis with imagination and political strategy, linking the immediate struggle for mutual aid in the pandemic to the long-term “fight for the society we deserve.”

In the middle of all this death and sadness, this campaign was the only powerful thing I could do. –Syeda, DRUM member, DRUM report 2020