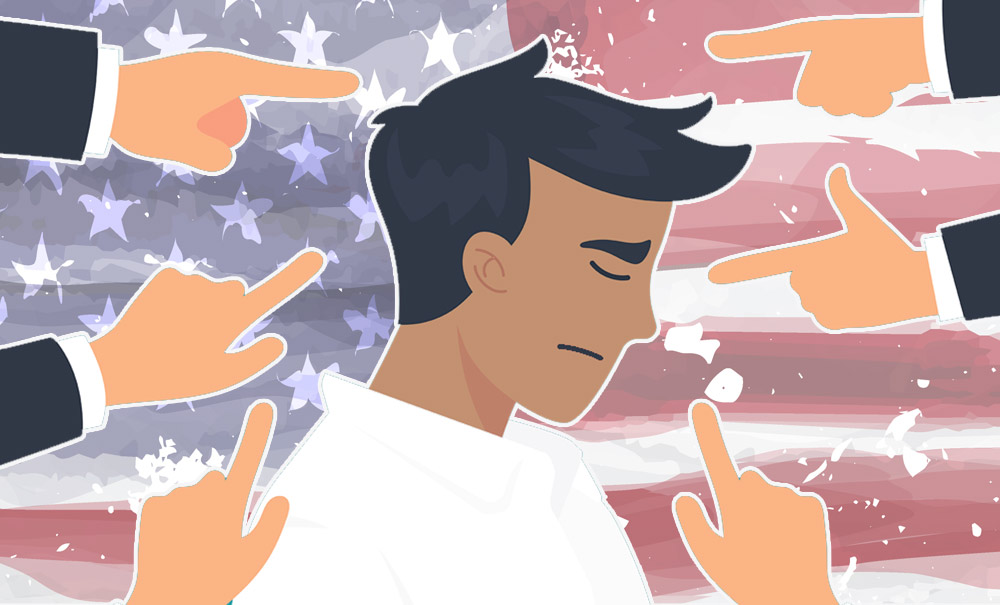 scape·goat
/ˈskāpˌɡōt/
noun
noun: scapegoat; plural noun: scapegoats
1. a person who is blamed for the wrongdoings, mistakes, or faults of others, especially for reasons of expediency.

There’s no denying it: life is going downhill for a whole lot of people in the US. This country now has an 18% poverty rate, the highest of all major Western industrialized nations. Good-paying, blue-collar jobs have practically disappeared. The educational system is falling apart, along with the infrastructure. People spend ever-increasing amounts of money for unreliable health care. In fact, life expectancy is falling and infant mortality is on the rise. Mass shootings are a common occurrence. Drug abuse is at epidemic levels. The US imprisons more of its population than any other country. Pollution and other environmental damage is poisoning us. Corruption infests every level of government.

It’s no surprise that people are frustrated, even angry. What’s harder to explain is why so many are willing to blame immigrants and refugees for their problems. Polls show that most people in this country support immigrants, yet tens of millions of citizens endorse the abuses and the reign of terror inflicted on migrants by the US government.

People accuse immigrants of draining resources from the economy, though every study shows they actually improve the economy and create more jobs. Many unjustly label immigrants as criminals, even though they are significantly more law-abiding than the rest of the population. This willful ignorance, flying in the face of the facts, is rooted in irrational thinking.

There’s no question that most anti-immigrant sentiment in this country is tied to white racism. Many people who attack immigrants embrace the idea of the US as a white nation that rules by dominating people of color. White nationalists cling to their race privileges as treasured possessions. In their fevered imaginations, the impending arrival of a non-white majority is perceived as an existential threat. Their guilty consciences make them terrified that, once they are in the minority, whites will be treated the same way they have treated people of color. By keeping out migrants from “shithole countries” in Asia, Africa, Latin America, and the Carribean, they hope to stem the tide of history, preserving a bubble of white supremacy in a multiracial world.

One of the ugliest forms of racism against immigrants is scapegoating. Scapegoaters blame immigrants of color for all the ills of US society. The narrative for scapegoating starts with the assertion that society has only a fixed quantity of jobs, education, health care, and wealth. According to this narrative, society is like a big pie: if we let somebody else have a slice, there’s less for us. And the reason life is going downhill today is supposedly because we give too much of our pie to immigrants. Immigrants should stay away from our pie, or at least wait in line until we’ve eaten our fill.

Though this narrative is illogical, it is persistent. Its believers don’t care that immigration is something our society needs to be healthy, or that immigration creates greater wealth—a bigger pie. They certainly don’t care about the human rights of migrants, or the fact that US policies have created massive migration. What matters to scapegoaters is the narrative itself—that they have identified people less powerful than themselves—people of color—that they can blame for their troubles.

It’s obvious to everybody living in the US that wealth and power are increasingly concentrated in the hands of a tiny number of people. Billionaires are the ones who hoard virtually the entire pie. They are the ones who are parasites on society—and not just our society, but the societies where migrants come from as well. The Trump tax cuts funneled billions of dollars to the richest 1%—money that could have been used to solve problems for ordinary people.

Scapegoaters are fully aware of this, but they are cowards. They are too morally weak and frightened to blame the billionaires for the declining state of the country, let alone actually try to do anything to stop them. Fighting back might involve some risk, some sacrifice. Cowards can’t handle that.

Instead, under the influence of people like Trump and his rich friends, scapegoaters punch down at immigrants of color—who are often the most vulnerable members of society. Demonizing immigrants gives the cowards an outlet for their anger, while still allowing them to kiss up to the rich and powerful. (Meanwhile, the rich and powerful laugh at them behind their backs.)

Scapegoaters are not just enemies of the immigrant human rights movement but enemies of everyone fighting for justice, equality, and freedom. They fortify the billionaire elite, undermine our solidarity, and function as shock troops for a corrupt, racist system. We need to expose them and call them out whenever they raise their cowardly voices.

2 comments on “The Psychology of Scapegoating Immigrants”